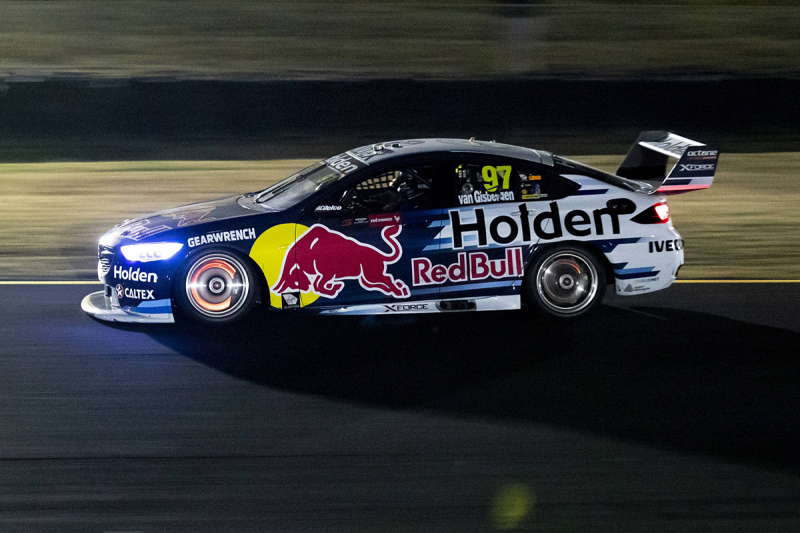 Van Gisbergen looked third-best to the two other effective race leaders of the 77-lap journey, McLaughlin and Craig Lowndes, but caught a break when the Safety Car was called just inside 20 laps from home.

It gave both the Red Bull Holden Racing Team entries a pit stop under yellow and even though Jamie Whincup had to stack behind the #97 ZB Commodore, he remained effectively fourth and went on to run down McLaughlin on fresher tyres and give Triple Eight a one-two.

McLaughlin led Lowndes under Safety Car, a margin which had already closed up after a see-sawing strategy and on-track battle between the championship leader and three-time champion, while van Gisbergen was third and Whincup fourth.

Lowndes, however, was tardy at the Lap 61 restart and gave up second position to van Gisbergen into Turn 1.

McLaughlin quickly moved three-quarters of a second clear of the chasing pack but van Gisbergen had practically erased that in a couple of laps, triggering an almighty stoush between the two title combatants from Lap 64.

The Shell V-Power Racing drove his #17 FGX Falcon defensively in the key passing zones until he copped a hit in the rear from van Gisbergen, who had to fan the throttle to avoid unloading McLaughlin completely, on the far side of Corporate Hill.

That brought Lowndes and Whincup back into the reckoning and van Gisbergen nearly binned his own car when he stepped onto the dirt exiting Turn 3 on Lap 65.

However, he got that run right three laps later and McLaughlin was powerless to stop him from marching through at Turn 4 on Lap 68.

A lap earlier, Whincup had got underneath Lowndes at Turn 10/Turn 11 and once van Gisbergen was released, #1 spent several laps pressuring McLaughlin.

He finally got the move done through the Turn 7 sweep on Lap 74, at which time van Gisbergen was four seconds up the road before slowing to arrange a form finish just over three laps later.

“It took a long time for that race to come alive, it was pretty stale and then the Safety Car came out,” said van Gisbergen.

“It was awesome, Scotty was driving really well and he defended awesomely; (I) gave him a couple of bumps but he wasn’t fazed.

“Enjoyed that and then unfortunately I think he had some pick-up and we got back through.

“(A) One-two for the team; thanks to the guys, really awesome weekend.”

McLaughin finished four seconds behind, and Lowndes another 1.5s back having looked a serious threat to win the first night race at Eastern Creek since he made his debut as a full-timer back in 1996.

“I tried so hard to keep them behind,” said McLaughlin.

“Sorry to the Ford fans I couldn’t get it done for you, I’m absolutely gutted.

“To everyone at Shell V-Power Racing, look, we had a great car today, got a great team, great pit stops, great strategy; unfortunately the Safety Car just came out at the wrong time.

The race had started well for at least one of the DJR Team Penske drivers when McLaughlin led team-mate Fabian Coulthard through the opening corners.

Coulthard, however, battled his #12 FGX Falcon in the early laps and van Gisbergen passed him just six corners into the race.

Whincup too got a run on the Saturday race winner of 12 months ago entering the main straight and they had a wild moment as Coulthard attempted to turn into Turn 1, hitting the left-rear corner of the #1 ZB Commodore.

McLaughlin’s lead over van Gisbergen hit a full second for the first time on Lap 7, and it approximately doubled in as many laps again.

Lowndes had started ninth and quickly fell back to 10th, but made up three positions on the race track by the time he pitted on Lap 16.

The top two of McLaughlin and van Gisbergen came in on Lap 18, then the new top two of Whincup and Coulthard on Lap 19.

McLaughlin lost time having had to enter his pit bay at an awkward angle and exited with a slightly reduced margin to van Gisbergen.

He was briefly headed by Scott Pye, on an undercut in the #2 Mobil 1 Boost Mobile ZB Commodore, but led the race from van Gisbergen when the first pit stop cycle had completed.

Van Gisbergen was the slowest of the top three through the second stint of the race and the deficit to McLaughlin was the best part of six seconds by the time they took their second pit stops together at the end of Lap 39.

Rather than be held up by his team-mate, Lowndes had pitted from third position five laps earlier, and he was nearly eight seconds ahead of McLaughlin when #17 exited pit lane after his second pit stop.

While there was no fuel mandate, McLaughlin was understood to be between five and six seconds up in terms of how much fuel he and Lowndes would have to take on in their final pit stops to make the chequered flag after 77 laps.

McLaughlin got the gap down to a little over four seconds, lost a second in traffic just beyond the 50-lap mark, then brought the margin back towards four seconds by the time they each made their final pit stops with 23 laps to go.

The championship leader jumped the three-time champion and was in fact 1.5s ahead of #888 as they got up to speed again but Lowndes caught the 25-year-old within three laps.

The Safety Car was called for debris when Todd Hazelwood dropped the rear wing of his #35 Bigmate Racing FGX Falcon on the main straight, kicking him into a wild spin at Turn 1.

The neutralisation prompted the rest of the field to make their final pit stops, which set up the remarkable battle which followed.

Chaz Mostert (#55 Supercheap Auto FGX Falcon) was best of the rest in fifth after an entertaining mid-race battle with Rick Kelly (#15 Castrol Nissan Altima), who finished sixth, and Pye.

Coulthard ended up 11th while Mark Winterbottom (#5 The Bottle-O FGX Falcon) took 16th, having dropped from 15th to 19th when he gambled on a fourth pit stop under the Safety Car.

Hazelwood did make the finish in 23rd, three laps down, ahead of Andre Heimgartner, whose #7 Plus Fitness Nissan Altima suffered steering damage in an early hit with Garth Tander (#33 Wilson Security ZB Commodore).

McLaughlin’s championship lead over van Gisbergen has been trimmed to 89 points ahead of the inaugural OTR SuperSprint at The Bend on August 24-26.