Liam Talbot took victory in Race 2 of the Australian GT Championship at the Red Rooster Sydney SuperNight 300 which finished under Safety Car after a big crash.

Championship leader Tony Bates also struck trouble early in the 40 minute encounter, as a broken drive-shaft meant that his Audi could not get off the line for the start of the formation lap and needed a tow back to the paddock.

A heavy late-race crash involving two cars brought out the Safety Car with eight minutes to go and Talbot (Walkinshaw GT3 Porsche) crossed the line first under those conditions. 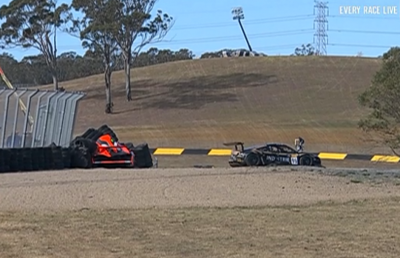 David Crampton and Nick Kelly made heavy contact with the tyre wall on the outside of Turn 3 pic: Fox Sports

The Aston Martin Vantage V12 GT3 of Andrew Miedecke was up the inside of David Crampton (KTM X-Bow GT4) at Turn 3, with Nick Kelly (Audi R8 Ultra) following the Aston through before the KTM and Audi made hefty contact.

It sent both cars spearing towards the outside tyre wall at Turn 3, with Crampton and Kelly walking away from the incident.

Following the extra formation lap due to Bates’ stricken car, the race got underway with a single-file start as Talbot led cleanly in the opening laps from Hackett.

Ross maintained third ahead of Emery, while further back, George Miedecke was making a charge through the field after starting from the back the field due to ECU dramas on Friday, which the team changed ahead of Race 2.

Hackett dived in early as the compulsory pit stop window opened, but was jumped in the pit stop sequence by both Emery and Ross as Talbot emerged in the effective race lead.

It wasn’t long though before Hackett made his move, slipping past Ross on the inside of Turn 2 on Lap 15 for third.

A carbon-copy move on Emery the following lap elevated Hackett to second before the Safety Car neutralised the race in the closing stages.

The Nissan GT-R of Brett Hobson came home seventh ahead of second place in Trophy class and eighth outright, Dave Stevens (Ferrari 458 GT3), who was penalised after Race 1 due to contact in the opening hit out.

Steve Richards brought the BMW Team SRM M6 GT3 across the line ninth after receiving a 10 second post-race penalty for Race 1 due to co-driver Ricky Capo turning around Bates.

Scott Taylor (Mercedes-AMG GT3) completed the top 10, as the Miedecke Motorsport Aston Martin finished up 11th ahead of a similar example driven Tony Quinn which had a clutch change overnight.

GT4 honours went to Jeremy Gray (Aston Martin Vantage V12 GT4) after the KTM X-Bow, the only other car in the class, was involved in the late-race crash.

UPDATE: The Miedecke Motorsport Aston Martin has since been excluded from the race for being under-weight.