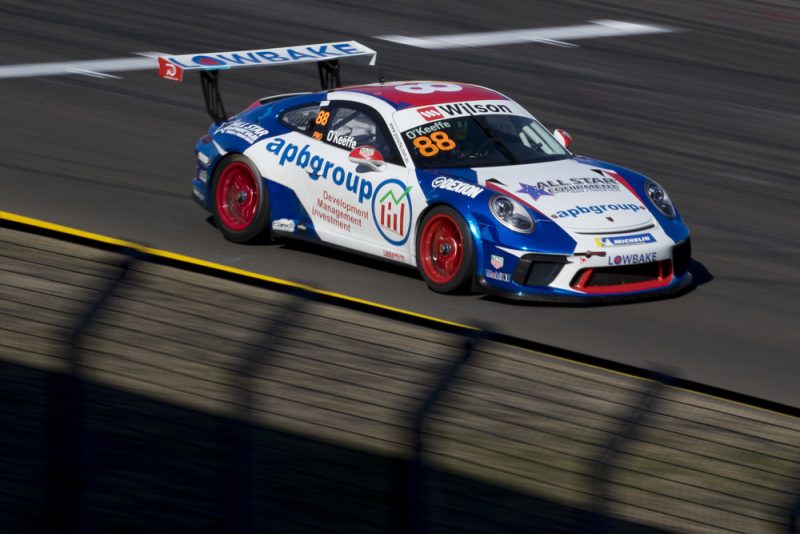 Dylan O’Keeffe has won a Porsche Wilson Security Carrera Cup Australia race for the first time after pole-sitter David Wall bogged down at the start of Race 1 in Sydney.

O’Keeffe (Ashley Seward Motorsport) broke the lap record in an all-the-way win while series contender Dale Wood was a DNF after last-lap contact with Wall, who came home in fifth position having dropped as low as seventh.

Wall had pipped O’Keeffe to pole the day prior but handed the ascendancy back when his Wall Racing entry made wheelspin as the lights went out.

The title holder dropped behind O’Keeffe, James Moffat (Wall Racing), and Dale Wood as the field piled through Moffat Corner (Turn 1) before also losing position to series leader Jaxon Evans (McElrea Racing), who ranged up on the outside at Turn 2.

Evans finally completed the pass out of Turn 3, when they made side-to-side contact which saw Jordan Love (Sonic Motor Racing) and Cameron Hill (Cameron Hill Racing) also get past Wall as the pack went through the Corporate Hill section.

Love ran off exiting Turn 1 on Lap 2, allowing Hill and Wall past, as O’Keeffe and Moffat traded fastest laps at the front.

The race leader broke the lap record on Lap 4 and got out to just over a second in front with four of 16 laps remaining.

Moffat closed in again on the penultimate lap before O’Keeffe restored breathing space and went on to take a first race win in the series from the Tickford Racing Pirtek Enduro Cup co-driver.

Evans, who started a relatively lowly sixth, finished third having tailed Dale Wood for some time before getting under the Sonic Motor racing entry at Turn 6 on the final lap.

While they didn’t touch, Dale Wood slewed sideways on exit and hit Wall as the pole-sitter tried to drive past, ricocheting Car #100 into the outfield grass.

Wall managed to make it home with damage, albeit pipped for fourth at the line by Love, but Dale Wood was a non-finisher.

The incident elevated Hill back to sixth position, which he had ceded to Love on Lap 8 when last year’s Porsche Michelin GT3 Cup Challenge series winner made a slick criss-cross at Turn 2 which ultimately resulted in a pass at Turn 4 after an elbows-out exchange.

TAG Heuer Pro-Am honours went to Adrian Flack in 12th outright after he put his car down the inside of class rival Roger Lago at Turn 1 on Lap 5.

A second 16-lap race at Sydney Motorsport Park is scheduled for 1445 local time/AEST before the joint races with Porsche Carrera Cup Asia this evening.