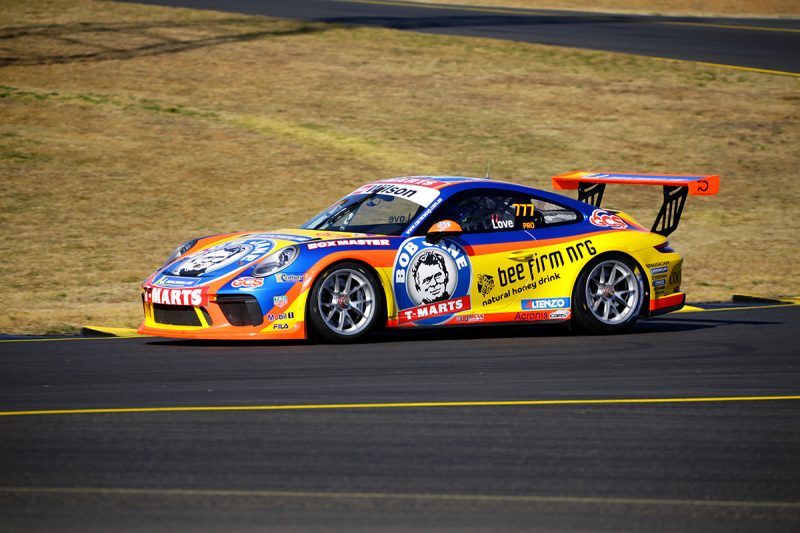 Love led home Moffat, Dylan O’Keeffe, and David Wall in what had become a four-car train until the final few corners after setting up the win with a brave move at the start.

The 2017 Porsche Michelin GT3 Cup Challenge series winner started from fourth position but made a superior start to those on the front row and they were briefly three-wide into the first corner.

Love swept around the outside as Moffat (Wall Racing), the man in the middle, tucked back in behind Race 1 winner O’Keeffe (Ashley Seward Motorsport).

Behind them, series leader Jaxon Evans (McElrea Racing) dropped from third to seventh with a sluggish getaway.

O’Keeffe ran completely off the road entering Brabham Straight (main straight) on Lap 2, which gave Moffat the run he needed to make the pass for second position around the corner at Turn 2.

He faced a deficit of around 1.5s to Love at the point, but both Moffat and O’Keeffe had caught Love by half race distance in the 16-lap affair.

Moffat had a significant look at the #777 Sonic Motor Racing entry into Turn 1, which bears his father’s name, on Lap 12 but thought better of it.

That meant that he lost momentum and had to focus on O’Keeffe in his mirrors until he bridged the gap to Love again two laps later.

Love appeared to be struggling for grip and also with the pressure from the former Virgin Australia Supercars Championship full-timer, and the split from first to second position was barely more than 0.2s at the end of Laps 14 and 15.

The 19-year-old played defensive on the final lap and it was Moffat who came briefly under threat again as Love won by 0.66s in the end.

Michael Almond saw that O’Keeffe’s lap record lasted only a race when he clocked the fastest lap on the third tour in the #77 Sonic Motor Racing entry on his way to eighth.

The Carrera Cup Australia and Carrera Cup Asia fields will now hold joint Pro-Am and Pro races this evening at 1715 and 1755 local time/AEST respectively at the Red Rooster Sydney SuperNight 300.