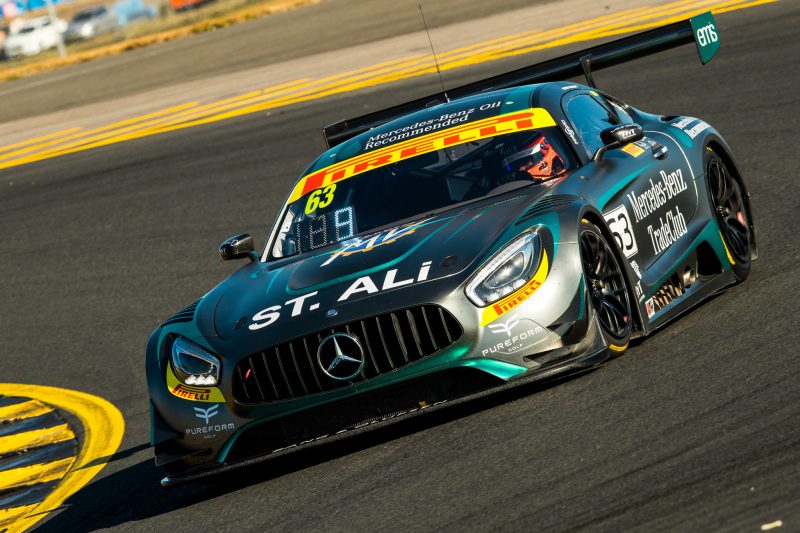 Peter Hackett has beaten Liam Talbot to victory in the final race of the weekend for the Australian GT Championship at the Red Rooster Sydney SuperNight 300.

Hackett made a crucial pass on the Porsche driver in the early stages of the shortened 30 minute race, maintaining his nerve in a tense conclusion as Talbot tried to close in.

The Mercedes-AMG pilot held on for victory ahead of Talbot and Fraser Ross, as Geoff Emery and Brett Hobson completed the top five thanks to an impressive race from the Nissan GT-R driver who started seventh.

Talbot managed to nose ahead at the start and pull clear by the time he got down to Turn 1, leading ahead of Hackett.

After Talbot ran wide on the exit of Turn 5 on Lap 2, Hackett seized the opportunity and moved by the Porsche with a brave move.

The Queenslander tried the switch back at Turn 6, however, and dived up the inside of Hackett, taking to the kerb and grass before ultimately settling for second.

Ross (McLaren 650s GT3) got by Yasser Shahin (Mercedes-AMG GT3) in the early stages at Turn 10 to take fourth, and the McLaren then had Emery in its crosshairs.

Shahin was shuffled back another position as Cameron McConville (Lamborghini Huracan GT3) slid by for fifth and then Steve Richards (BMW M6 GT3) also made a move on the Mercedes driver.

As he had done in each of the weekend’s races, Hackett brought the Eggleston Motorsport car in as soon as the compulsory pit stop window opened while Talbot continued on.

The decision proved fruitful for Hackett who emerged comfortably in front of Emery as Talbot dived in for his CPS with 10 minutes to go.

Upon rejoining, Talbot immediately had to defend from Emery at Turn 2 after losing the lead, holding onto second as the latter then came under fire from Ross who got by for third.

Hackett and Talbot then exchanged quick laps but the former managed the gap until the chequered flag.

Jeremy Gray (Aston Martin Vantage V12 GT4) eased to GT4 honours after the only other car in the class was involved in a crash during Race 2.

Ross has this weekend taken over the lead of the Australian GT Championship from Tony Bates.

That title, and the Australian Endurance Championship which is currently led by Max Twigg/Tony D’Alberto, will be decided when the final round takes place at Hampton Downs Motorsport Park in New Zealand from October 13-14.