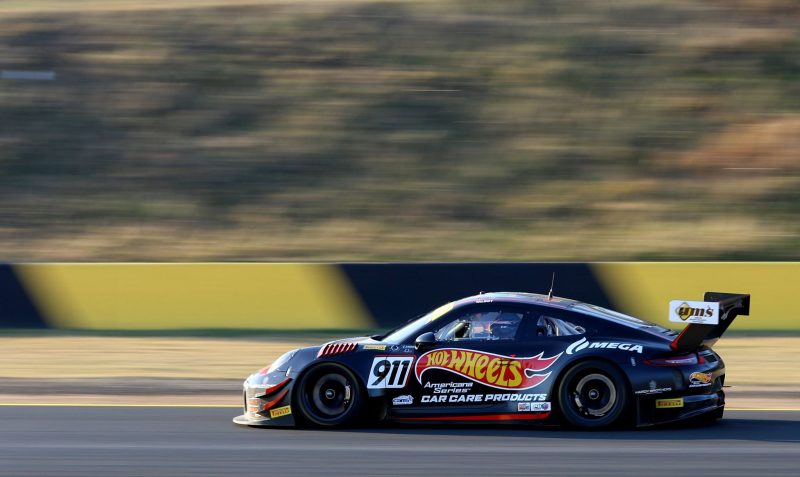 Liam Talbot has taken victory in an action-packed opening race for the Australian GT Championship at the Red Rooster Sydney SuperNight 300.

The Walkinshaw GT3 driver emerged out front at the end of the compulsory pit stop sequence after running fourth in the early stages.

Talbot managed to hold on to the lead despite immense pressure from Peter Hackett, who eventually spun and left the former to cruise home with a 12 second advantage at the end of the 40-minute race.

The Lamborghini Huracan GT3 of Adrian Deitz and Cameron McConville dropped to 11th at the flag after an impressive first stint from McConville which saw him momentarily lead the race.

Pole-sitter Hackett held on to the lead on the run through the first two corners, as Mark Griffith got turned around at Turn 2 by the Ferrari 458 GT3 of Dave Stevens.

Steve Richards, who started from the outside of the front row, managed to keep in touch with Hackett in the early stages, but the former eventually opened up a lead.

Hackett was the first to blink and brought his Mercedes-AMG GT3 into the pits for its compulsory pit stop at the halfway mark of the race as the CPS window opened.

Richards pitted his BMW M6 GT3 on Lap 13, as McConville decided to run a lap longer out front before handing over to co-driver Deitz.

Talbot emerged in the race lead as Deitz rejoined third behind Hackett, who began pressuring Talbot for the lead.

Hackett tried a move around the outside at Turn 4 but slid out sideways and had to file back in behind the Porsche.

Another attempt for the lead came a handful of laps later with Hackett putting a move down the inside at Turn 2 but running wide and letting Talbot back past.

The Mercedes driver then spun on the exit of the final corner in the closing stages of the race, leaving Talbot to ease to victory.

Shahin completed the top five, one position ahead of the BMW Team SRM entry of Richards and Ricky Capo.

Tony Bates (Audi R8 LMS GT3), who was turned around by the BMW at Turn 1, rounded out the top 10, while David Crampton and Trent Harrison won the GT4 class in their KTM X-Bow in 18th outright.

A front left tyre failure forced Scott Taylor into pit lane aboard his Mercedes-AMG GT3 in the first 10 minutes of the race, dropping a number of laps down.

Brett Hobson in the Hobson Motorsport Nissan GT-R copped a five second time penalty, which he served in his CPS, for a start infringement and finished 13th outright.

Round 5 of Australian GT continues with Race 2 at 1225 AEST on Saturday.