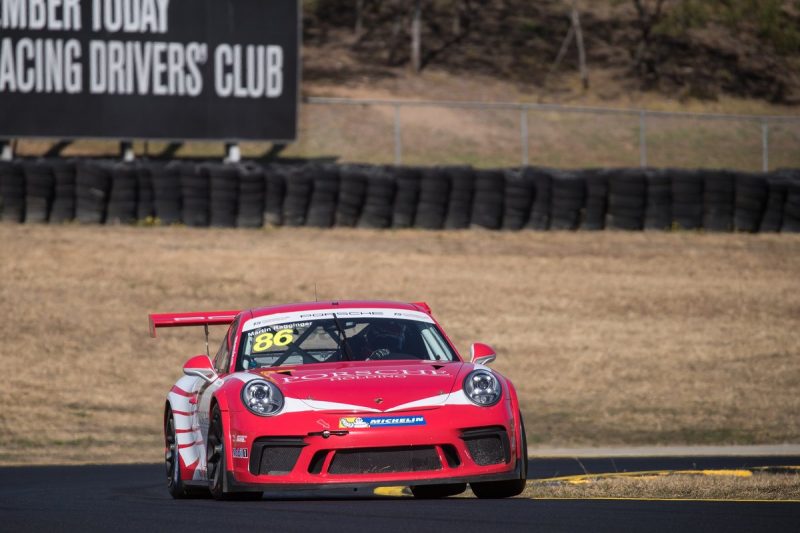 Martin Ragginger has secured pole position for both Porsche Carrera Cup Asia races in Sydney despite sitting in pit lane for most of qualifying.

With the drivers’ respective second-fastest laps determining the grid for Race 2, Ragginger also managed to take pole for Saturday’s second encounter with what was in fact the second-fastest lap of the session altogether (1:30.043s).

Hamprecht’s second-best lap did, however, get him onto the front row for the second race of the weekend.

A handful of incidents staggered proceedings as the international drivers continued to acclimatise themselves with the circuit.

Yuan Bo had a wild moment at Turn 1, bringing out the red flag after the first 10 minutes.

The Chinese driver dropped off the road, bouncing through the gravel before spinning and ending up backwards on the track, fortunately avoiding contact with the wall.

A handful of drivers were forced to take to the grass in order to avoid the stricken car, with race control throwing a brief red flag period to clean up the debris as Bo made his way back to the pits.

Maxime Jousse set a 1:30.471s to jump to fourth, moments before a high-speed trip through the grass at Turn 1.

Wayne Shen also had trouble with a spin at Turn 4, while Mak Hing Tak ended up worse off, hitting the tyre wall after losing control on the grass between Turns 4 and 5 and spearing to the inside of the track.

Another red flag was thrown as the latter limped back to the pits with damage to the front of his car, until the green flag flew once again with under 10 minutes to go.

Shen once again found himself facing the wrong direction with another spin, this time on the exit of the final corner.

Both van der Drift and Hamprecht were on a charge late in the session but could not better Ragginger’s time.

Pro-Am went the way of Bao Jinlong, who finished less than a tenth ahead of Hong Kong driver Francis Tija.

Earlier in the day, Carrera Cup Asia were on track for a pair of 30 minute practice sessions.

It was Tanart Sathienthirakul that proved quickest in Practice 1, while Bamber managed to grab the fastest time in Practice 2.

Porsche Carrera Cup Asia will hit the track again on Saturday for Race 1 at 1105 AEST.