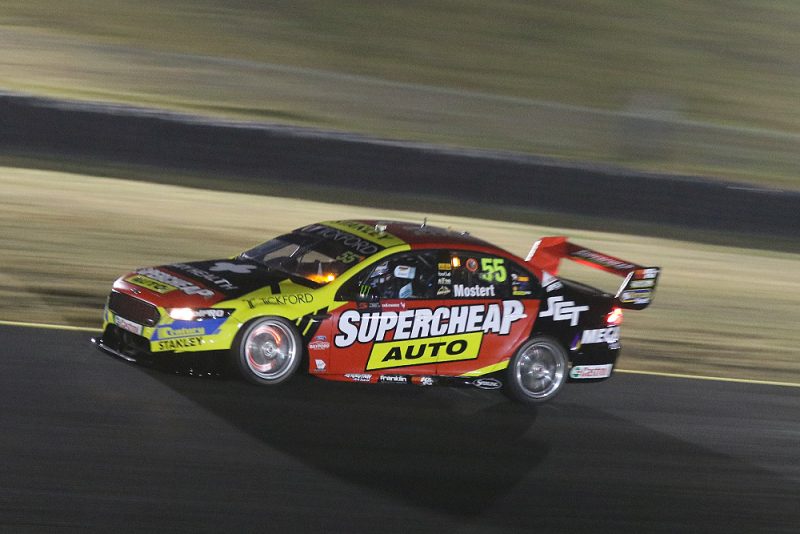 Tickford Racing’s Chaz Mostert has set the pace in the only practice running under lights for the Red Rooster Sydney SuperNight 300.

Mostert was joined in the Practice 1 top three by team-mate Mark Winterbottom as they were split by Scott Pye (#2 Mobil 1 Boost Mobile ZB Commodore).

The #55 Supercheap Auto FGX Falcon held the fastest lap for three spells, including 20 continuous minutes after Mostert reeled out a 1:29.3158s on tyres used last time out at Queensland Raceway.

Mostert was cautious about reading too much into the results, which come a fortnight after something of a return to form for his battling Ford squad in Ipswich.

“(We were) probably the only cars to run (new) tyres, so popped up there at the end,” he explained.

“We were okay on the used tyres; but look, it feels pretty comfortable.

“I’ve been pretty lucky this year; I went to Paul Ricard this year and raced in the night so you’ve got to learn all those things visually.

“It felt really quick out there, probably the fastest a Supercar has ever felt for me flashing through bits of light in the darkness; a pretty cool aspect.

Pye had himself been nearly a quarter of a second quicker than Winterbottom when the clock ticked down to zero, having moved into first position with just over five minutes remaining.

“The balance is much nicer when the temperatures are down and in the last few events the UV and track temperature have hurt us a bit,” he reported.

“We’re a bit excited and optimistic as to what we have this weekend; it’ll be interesting to see if that is the case.

“It was really nice, it was good then. It’s obviously Practice 1, you can’t read too much into it, but certainly I think it went well.”

Winterbottom moved the #5 The Bottle-O FGX Falcon into what was second position in the final minute of the 40-minute session, which kicked off in night time conditions at 1800 local time in Western Sydney.

“To go down that straight, the first lap, I was actually nervous because I tried a yellow visor and it’s like someone just turned the lights on when you’re asleep.

“Really cool spectacle, makes the car handle a little bit different, but ultimately, it’s the same stuff. It understeers at night time and understeers in the day, but whatever. Good fun.

“It was good at (Turn) 1, but I’m not really that happy with the car. It’s kind of going back to square one because we’ve adopted another set-up for this weekend.

“Good at (Turn) 1, but struggled a bit through that tight stuff, lost the front. Chaz was quick, we can look at his data and see what he’s doing; it’s not a bad start.”

Nick Percat (#8 Dare ZB Commodore) was a late mover from 13th to sixth position, a significant jump given the use of the knockout qualifying system tomorrow afternoon and the expectation that Practice 1 will be faster than Practice 2, which should take place shortly after the hottest period of Saturday.

Jamie Whincup (#1 Red Bull HRT ZB Commodore) spent much of the session in the back half of the field before similarly jumping into the top 10 with a time which was ultimately good enough for seventh.

James Courtney (#25 ZB Commodore) made for both Walkinshaw Andretti United cars in the top 10, which was rounded out by Shane van Gisbergen (#97 Triple Eight ZB Commodore) and David Reynolds (#9 Penrite ZB Commodore).

Andre Heimgartner was 18th having effectively missed the first half of the session due to an electrical problem which left the #7 Plus Fitness Nissan Altima without a dashboard display.

Lee Holdsworth was 24th after Preston Hire Racing had to change the steering rack in the #18 ZB Commodore.

Given the SuperNight format, teams took advantage of the allowance to practice pit stops in the dark conditions.

Many also rolled out modified liveries and other lighting elements, such as blue lighting around the grille of Todd Hazelwood’s #35 Bigmate Racing FGX Falcon and the undercarriage of Jack Le Brocq’s #19 Tekno Autosports ZB Commodore.

A second practice session, scheduled for 30 minutes, will take place tomorrow at 1320 local time/AEST before Armor All Qualifying late in the afternoon.