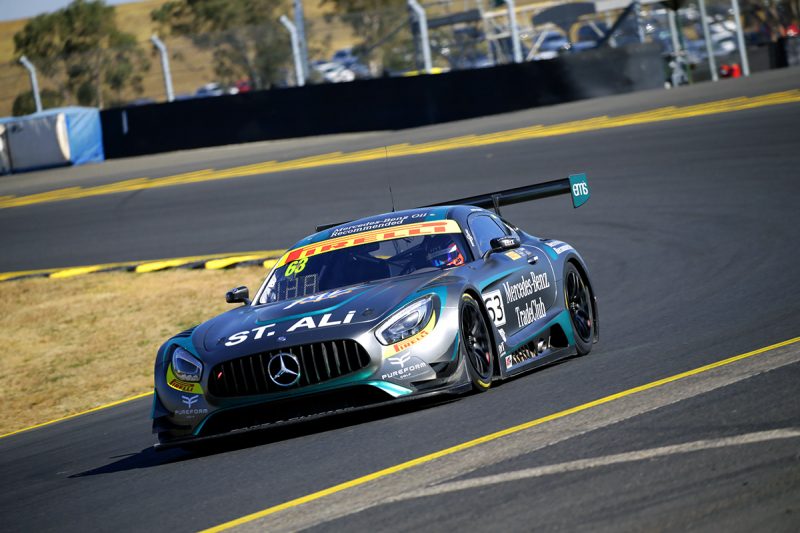 Hackett put his stamp on proceedings on his second lap in each of the 15-minute sessions before going even faster on his next lap on both occasions.

His best time in the Eggleston Motorsport entry was ultimately a 1:27.7283s set on Lap 3 of Qualifying 2.

Steve Richards/Ricky Capo will start Race 1 from the outside of the front row after the former was faster in the #100 BMW Team SRM BMW M6 in Qualifying 1 with a 1:28.3849.

Fraser Ross improved by over 0.4s from session to session to go third-fastest on combined times in the #59 YNA Autosport McLaren 650S, while Cameron McConville earned fourth for the #6 Wall Racing Lamborghini Huracan which he is sharing with Adrien Deitz.

Liam Talbot (Walkinshaw GT3 Porsche 911 GT3 R) recorded 1:29.0s times in both sessions to qualify fifth, where he will start alongside the Miedecke Motorsport Aston Martin Vantage V12 GT3 of father and son Andrew and George Miedecke which missed practice due to a coil pack failure.

Yasser Shahin might have pinched a spot on the front row but his fastest lap of Qualifying 2 was affected by traffic in the form of the #50 M Motorsport KTM X-Bow GT4 at the Turn 8 hairpin.

The #96 Hobson Motorsport Nissan GT-R of Brett Hobson was less than 0.04s outside in 11th position.

The fastest of the two GT4 entries was the aforementioned X-Bow thanks to Trent Harrison’s effort in Qualifying 1 (1:36.1909s), 22nd outright of the 24-strong field, in the car which he is co-driving with David Crampton.

While Hackett’s benchmark was far from a practice/qualifying lap record, it was over 0.7s faster than that which Kelvin van der Linde clocked on his way to pole at SMP last year.

Race 1 of the penultimate round of the season, to be run over 40 minutes, starts today at 1550 local time/AEST.