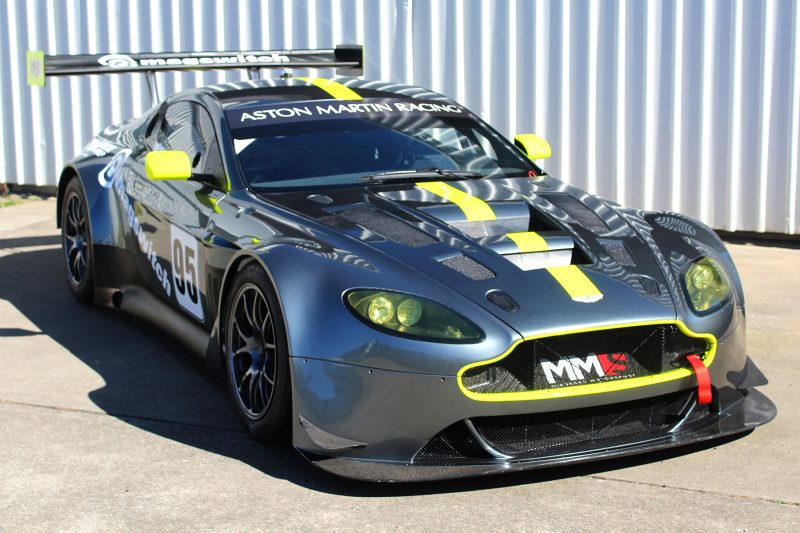 Miedecke Motorsport has revealed the new Aston Martin Vantage V12 GT3 which it will race in this weekend’s round of the CAMS Australian GT Championship at Sydney Motorsport Park.

The chassis is one of the last V12s to have been built by Prodrive in the United Kingdom and will be piloted by father and son pairing Andrew Miedecke and George Miedecke.

It replaces the Vantage which George Miedecke crashed in last year’s Bathurst 12 Hour, in which it was later revealed he suffered carbon monoxide poisoning.

The new car, which the Miedeckes built up over the new year period, has in fact been run-in by way of starts in the NSW Production Sports Championship.

Round 5 of the Australian GT Championship, which supports the Red Rooster Sydney SuperNight 300, marks its first appearance on such a stage.

“Chassis 019 which was campaigned in Asia by Craft Bamboo Racing was the car we had at Bathurst last year, the sister car to the car which won the GT Asia Series title in 2016,” said George.

“Unfortunately we had an issue with carbon monoxide entering the cabin and the resulting crash saw the chassis take a hit.

“It’s not irreparable, but we took the decision to go down the road of a new car, which is the one we are debuting this weekend.”

The Miedeckes, whose team continues to provide support for Aston Martin Racing clients in Australia, have made sparing appearances in the last two seasons.

Andrew has joined Jeremy Gray in a GT4-specification Aston Martin for the two Australian Endurance Championship races so far this year.

George’s events include this year’s Bathurst 6 Hour, when he finished eighth outright with Gray in a Ford Falcon FG GT-F, but he has not competed in Australian GT since 2016.

In that season, the Miedeckes won the Sydney Motorsport Park race when it was a 101-lap affair which formed a round of the Australian Endurance Championship, during which George set a new GT3 lap record.

“Since the crash at Bathurst the following year (2017) and with business commitments at home, we had to curtail our plans until we had taken stock of our program,” added George.

“We’ve done that and have always targeted Sydney as the perfect return to the championship for us.

“The car was hooked up in 2016, and track conditions on a Supercar weekend are always better.

“We had it well and truly sorted during our last run in AGT and the weekend ran flawlessly.

“We didn’t grab pole in either session, but we had great race pace and we knew we’d be strong in the longer runs.”

The team is also aiming for a larger presence again in Australian GT next year.

“Ideally we’d like to run a couple of cars in 2019 for a full return to the championship, although despite the introduction of the new twin-turbo 4-litre Vantage, we’ll be running the 6.0-litre naturally aspirated V12 for the time being,” said George.

“We know the car and know its strengths, it’s a tried and tested package and we’re looking to prove that again this weekend.”

The 24-car field for this weekend’s GT racing features three Vantages, including another GT3 for Tony Quinn and Gray’s GT4.

Australian GT will be on track for both days of the event, with practice, two qualifying sessions, and the first of three 40-minute races this Friday.