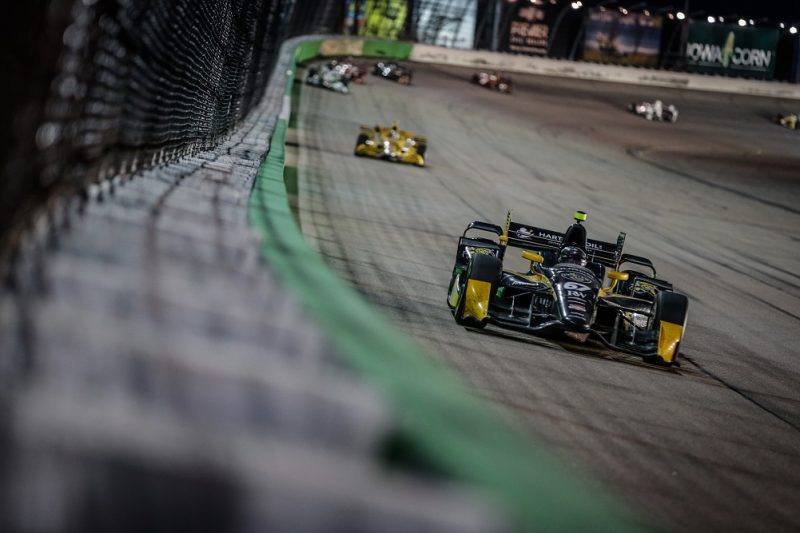 IndyCar last raced under lights in Iowa in 2015

Next year’s IndyCar race at Iowa will be held under lights for the first time in four years, series organisers have announced.

The race had been run on Sunday afternoons for the past three years in order to avoid a clash with NASCAR’s Cup Series race in Kentucky, which has a common United States television rights holder in NBC.

The change coincided with a decline in attendances at Iowa Speedway.

However, Iowa has now been moved back a fortnight in the IndyCar calendar to July 20 next year, allowing for the return to a Saturday night timeslot.

“The staff at Iowa Speedway and our partnership with NBC Sports have helped us deliver exciting night racing for the Verizon IndyCar Series in 2019,” said Mark Miles, CEO of IndyCar parent, Hulman & Company.

“Our cars look great under the lights, and the competition should be even more fierce given what should be cooler conditions.”

Iowa Speedway President David Hyatt said, “The return of a night race for IndyCar at Iowa Speedway is exciting news for our race fans, sponsors, and the entire region.

“IndyCar races here are not only thrilling sports entertainment, but also a boon for the local economy.

“Our track provides some of the best racing you’ll see anywhere, which will be good for attendance. This is one of our crown jewels and a can’t-miss weekend.”

James Hinchcliffe won this year’s Iowa Corn 300 from 11th on the starting grid after Josef Newgarden was denied a final chance to reclaim the lead when he was trapped by a late Caution period.

Scott Dixon leads the series by 46 points ahead of the next round at Pocono Raceway on August 18-19.