Rossi wins in Mid-Ohio with two-stopper

Rossi wins in Mid-Ohio with two-stopper 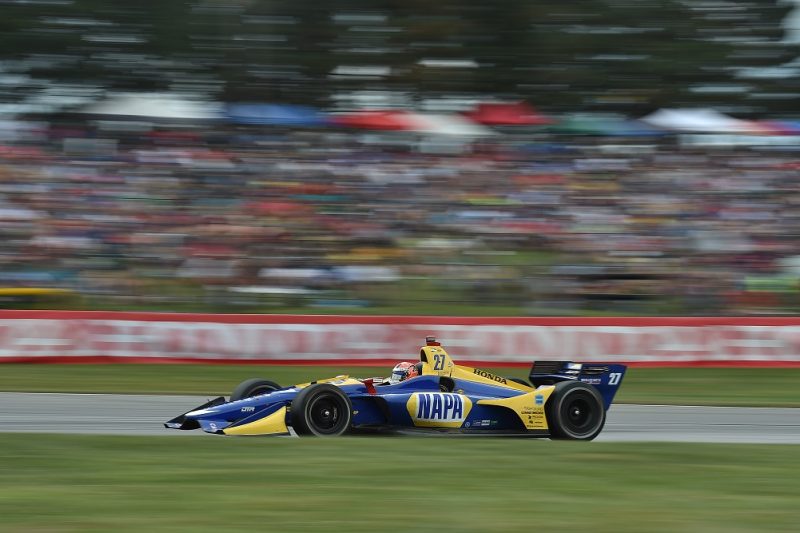 Alexander Rossi has won the Honda Indy 200 at Mid-Ohio after pulling off a two-stop strategy when no one else made fewer than three.

Rossi (#27 Andretti Autosport Honda) led 66 laps out of 90 and ultimately won by 12.8285s over Robert Wickens, while Will Power finished third and Scott Dixon fifth.

Starting from pole, Rossi led the field away from Power and Josef Newgarden, who rounded up Ryan Hunter-Reay (#28 Andretti Autosport Honda) when the latter checked up behind Power.

The top five, including Wickens in fifth, ran in that order until Hunter-Reay pitted on Lap 14 and Wickens on Lap 15, at which time they swapped order.

Team Penske duo Power (#12 Chevrolet) and Newgarden (#1 Chevrolet) caught Rossi, who was being held up by a backmarker.

The Australian dropped into pit lane on Lap 24 and emerged between Wickens and Hunter-Reay, the latter of whom had swapped to black tyres.

Newgarden found a way past Rossi, only to pit at the end of the lap and rejoin behind Hunter-Reay, while Wickens was pulling away from Power.

Rossi finally pitted on Lap 29 and dropped to fifth position.

Wickens’ lead over Power was out to 14 seconds when he pitted again on Lap 38, switching from red tyres to blacks.

Hunter-Reay, who has been pressuring Power, took service again a lap later but was jumped by Newgarden through the cycle when the 2017 champion pitted on Lap 42.

Power had been understood to be aiming for two pit stops but made the second of those on Lap 49 and was easily passed by Newgarden on his out lap.

Rossi led by 24 seconds, in part due to Wickens being held up by traffic, when he made what would be his final pit stop on Lap 59 and resumed within two seconds of the Canadian’s #6 Schmidt Peterson Honda.

The rest of the front-runners began their third pit stops on Lap 64, first Newgarden and then Wickens and Hunter-Reay.

Hunter-Reay fell behind Dixon (#9 Chip Ganassi Honda), who had run an effective sixth position since the very early laps and would now threaten Newgarden’s position.

Power closed in on Rossi and while he had to pit again on Lap 69, he had done enough to get back ahead of Newgarden through the cycle.

He would cut into the gap to Wickens but didn’t have enough laps to seriously threaten, while Rossi cruised home in the end.

Newgarden was nearly three seconds behind Power in fourth, and nearly a second up on Dixon.

Aside from the winner, Sebastien Bourdais (#18 DCR w/ Vasser-Sullivan Honda) was arguably the star of the race in driving from the very back of the 24-car grid after a crash in qualifying to pass Hunter-Reay for sixth on Lap 84, where the Frenchman would finish.

Rossi has now moved to second in the series, reducing Dixon’s lead to a still healthy 46 points.