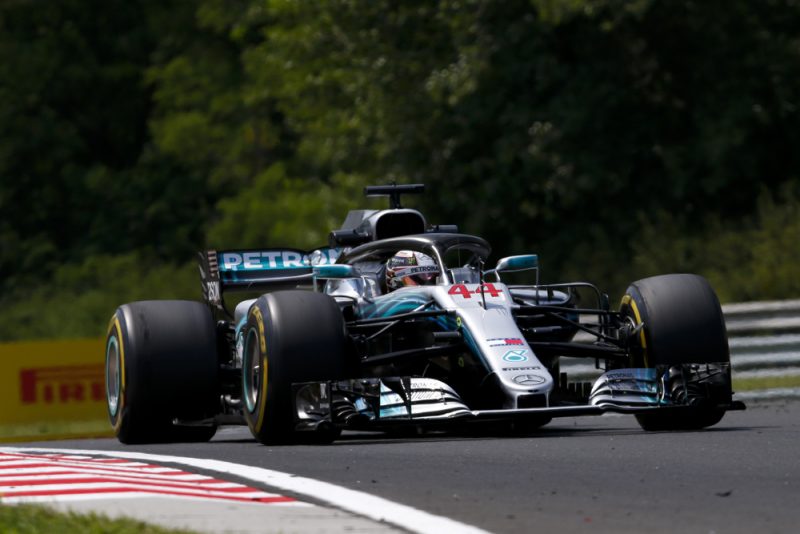 Lewis Hamilton has cruised to victory in the Hungarian Grand Prix to extend his title advantage to 24 points over Sebastian Vettel.

Hamilton headed the race from Vettel and Kimi Raikkonen after a late race clash with Valtteri Bottas.

Bottas had been running second, but struggling for grip on old tyres his staunch defence finally gave way with four laps to run, at which point his race unravelled.

Vettel ran an alternate strategy that saw him lead during the middle part of the race, only to drop behind Bottas after his stop where he would remain until the final laps.

An even start saw the front two rows get away cleanly, Vettel going the long way around of Raikkonen at Turn 3 the only change in position among the front four.

Verstappen gained two spots off the line to move to fifth, while Ricciardo lost four places to fall to 16th after contact at the first corner with Marcus Ericsson’s Sauber.

Charles Leclerc’s race was over on the opening lap, parking the Sauber to become the race’s first retirement having also had contact at the opening corner.

Soon after Verstappen became the second retirement after he reported a loss of power, stopping on circuit on Lap 6 and triggering a brief Virtual Safety Car.

Ricciardo quickly made up for his sluggish start, carving his way through the field to sit fifth when he finally stopped after more than 40 laps of running.

Raikkonen was the first of the front runners to stop, swapping his ultrasoft tyres for a set of softs after just 15 laps.

It forced Mercedes’ hand, Bottas heading in next time around with a better stop keeping him comfortably ahead of the Ferrari.

Out front, Hamilton maintained a comfortable lead of more than eight seconds over Vettel, the Ferrari driver seemingly biding his time in the hope Hamilton’s tyres would give up their performance and provide an opportunity later in the race.

Mercedes called the race leader in after 25 laps, his 2.7s stop dropping back on track into second place comfortably clear of Bottas.

Having started on a set of the soft compound tyres, Vettel was the last of the leaders to take his stop on Lap 39, a lap after Raikkonen had stopped for a second time.

It proved a slow stop, dropping Vettel to third but with a pace advantage courtesy of a brand new set of ultrasoft tyres.

A promising race for Stoffel Vandoorne came to an end while running ninth, drawing the Virtual Safety Car for the second time on Lap 51.

Vettel’s efforts to attack Bottas for second were blunted, the Ferrari struggling to run close enough to the Mercedes to launch a viable attack.

Raikkonen closed up to the battle for second place with ten laps remaining, falling in line behind Vettel without challenging.

With four laps remaining Vettel finally got a run on Bottas, launching an attack into Turn 1 before out-dragging the Mercedes into Turn 2.

A defiant Bottas though refused to give in, braking late on the dirty side of the track and making contact with the rear of Vettel’s car.

Bottas’ race went from bad to worse as he struggled with front wing damage, soon after understeering into Ricciardo as the Red Bull attempted to go around the outside at Turn 1.

The Mercedes slid wide of the apex, tagging the side of the Red Bull and forcing Ricciardo off the road.

It cost neither a position, though stewards announced their intention to examine the incident after the race, though it mattered not, Ricciardo making the move stick at the start of the final lap.

Out front, Hamilton won by nearly 20 seconds from Vettel and Ricciardo, extending his title advantage as Formula 1 heads into its summer break.