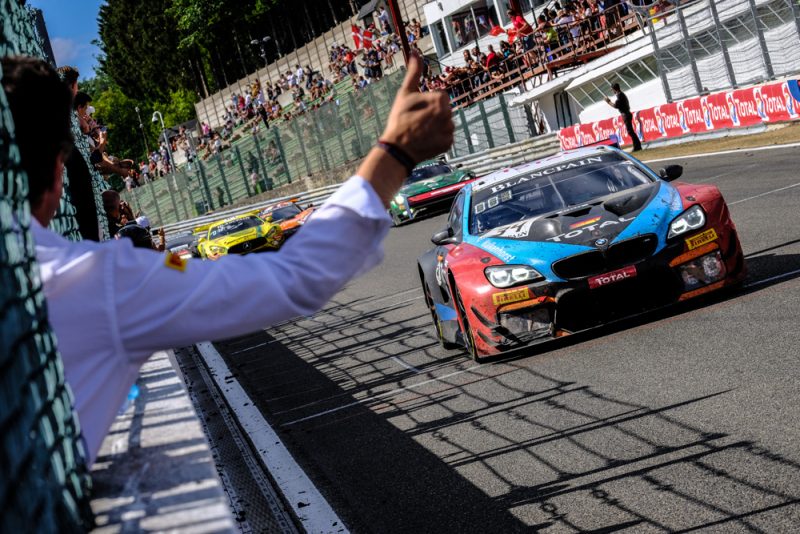 BMW has claimed the top two podium places at the 24 Hours of Spa with Walkenhorst Motorsport taking victory.

Philipp Eng, Tom Blomqvist and Christian Krognes won by just over 10 seconds from the Rowe Racing BMW after a late battle between the two.

The #34 Walkenhorst car held a comparatively comfortable 20 second advantage heading into the last round of stops, but the Rowe Racing crew were able to half that deficit in the stops.

Ultimately though Nicky Catsburg, who was at the wheel of the #99 for the final stint, was unable to make any further progress.

The first half of the race was marred by a frightening crash between a Lamborghini and Bentley at Raidillon, which drew the red flag for more than an hour.

Early leaders R-Motorsport faded to ninth by race’s end, the Aston Martin crew suffering a number of punctures as they fell down the order.

M-Sport Bentley too never regained its advantage after the race leading #8 entry made contact with a back marker and suffered steering problems during the opening half of the race.

It was eventually forced out of the race after tangling with the Team75 Bernhard Porsche 911 GT3 R with neither car reaching the finish line.

The second M-Sport Bentley had run towards the front after making solid progress through the field, only for a problem with the radiator and another mechanical gremlin in the car’s rear saw the car home just 25th.

Victory for BMW was the marque’s third in four years, with Walkenhorst Motorsport having proved front runners from the ninth hour of the race.

The Blancpain GT Series now heads to the Hungaroring for the Sprint Cup on August 31 – September 2.