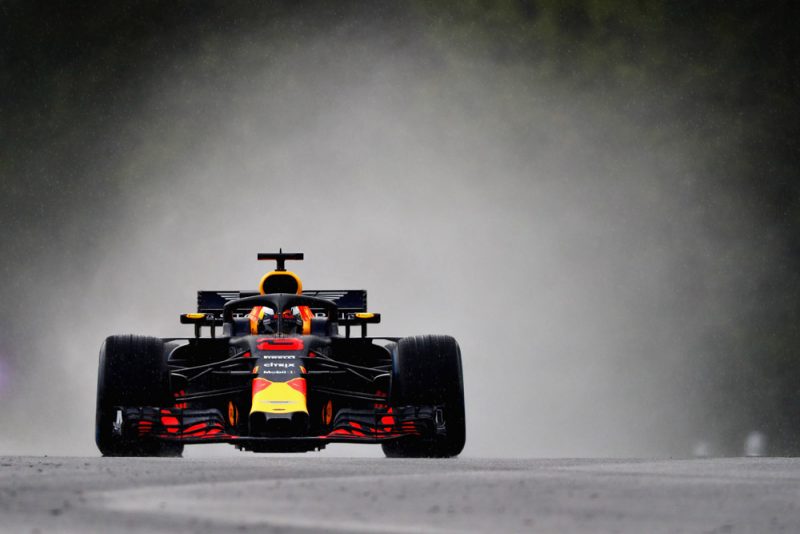 Daniel Ricciardo has been left to rue a spin by Lance Stroll at the start of Qualifying 2 in Hungary which left the Australian just 12th on the grid for Sunday’s race.

Changeable conditions dominated the qualifying proceedings, with the weather rapidly deteriorating at the start of Qualifying 2.

The early runners were able to get the best of conditions on the intermediate tyre, with the Ricciardo’s lap ruined when Stroll spun at Turn 9.

The Red Bull driver had only narrowly progressed from Qualifying 1 after choosing to run on a set of soft tyres.

Conditions at the start of Qualifying 1 saw the field on intermediates, before Carlos Sainz proved the ultrasoft tyres were faster.

Ricciardo’s initial time quickly fell outside, relegating him into the cut off positions, and was only saved with a last flyer at the end of the session.

“The strategy, for sure we took a risk in Q1 using the soft,” Riccairdo said.

“I think in hindsight for sure we’d go on the ultra and just be safe – that was too close.

“We did have a soft to use for Q1 in dry conditions, that was always the plan.

“It wasn’t like it (using the soft tyre) was against the plan, but it was closer than we wanted it to be.

“And then Q2, so the rain came, so the first guy on track was getting the best track, and it just got worse and worse,” Ricciardo added.

“So, not only to be further (up) in the pack but you needed to get that first lap in.

“Stroll spun in front of me, so I had to abort that lap and then the following lap was too wet for the inter; the last sector was just trying to survive.

“We had to put the extreme on but the track was nowhere near what it was in the beginning so the first lap had to count, and we had the guy in front. So just unlucky.”

Ricciardo improved on his personal best late in Qualifying 2 on a set of full wet tyres, but it was still only good enough for 12th.

It leaves him out of position for tomorrow’s race in a car many expected to be capable of winning Sunday’s race.

“I’ll have a fight on my hands, starting 12th. That’s going to be interesting,” Ricciardo mused.

“So I’ll sleep tonight, I’ll come tomorrow fired up and pull off some clean moves – if not, then use a few guys as my brakes.”

The Hungarian Grand Prix begins at 2310 AEST on Sunday evening.