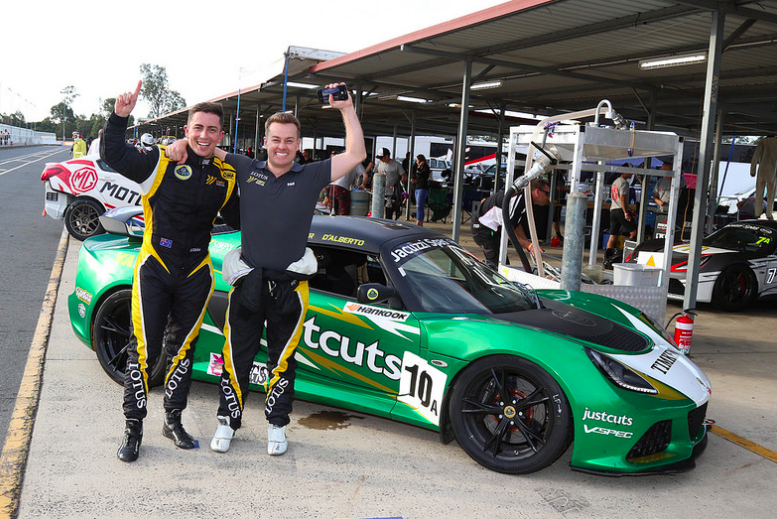 Grant Denyer and Tony D’Alberto clinched their first victory of the season following a dominant display in today’s 300km enduro in Round 4 of the Shannons Nationals at Queensland Raceway.

The pair had led the opening 43 laps of Saturday’s Fight in the Night only for a puncture to derail their bid.

However, today the television presenter and Shell V-Power Racing Team co-driver grabbed the lead on lap 5 and never looked back to take the chequered flag after 96 laps.

Grant and Iain Sherrin closed in on the leaders late in the race but were left to settle for second behind the wheel of their BMW M4.

Kyle Alford and Anthony Alford (Lotus Exige) crossed the line third for the event, while yesterday’s ‘Fight in the Night’ winners Beric Lynton and Tim Leahey (BMW M3) were fourth.

Lynton and Leahey ultimately took the outright round win for the round, ahead of the Sherrins and Denyer and D’Alberto in third.

Class B1 had a thrilling battle, with Robert Rubis and Scott Turner taking both today’s win and the round victory.

Meanwhile, Class C win went to Leigh and Mitch Naylor, while A2 was claimed by Ashley Heffernan and Daniel Clift.

The next round of the Australian Production Car Series will be at Winton on September 1-2. 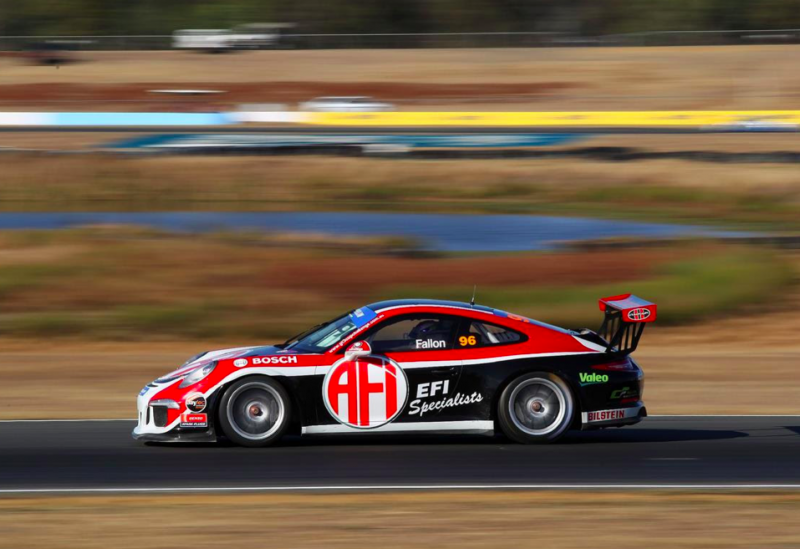 After finishing fifth in Race 1, Fallon burst through from the third row of the grid to lead on the exit of Turn 2 in Race 2.

The former Formula 4 driver came under immense pressure from Murray throughout the contest but held firm to take the win.

Chelsea Angelo came through to finish third ahead of Jimmy Vernon and Dan Day.

Max Vidau recovered to sixth after a lock up at Turn 3 dropped him battling for the lead down to eighth spot.

Fallon’s victory in Race 3 was made all the sweeter following a DNF for title rival Murray, who suffered radiator damage.

Vidau finished second while Angelo collected her second podium of the round in third.

Fallon claimed the round win from Vidau and Angelo.

Pro-Am honours went to Brett Boulton, who clean swept the Queensland Raceway round.

The local driver topped the round podium from Danny Stutterd and his McElrea Racing team-mate Michael Hovey.

Meanwhile, Christian Pancione continued his impressive Class B form by winning the class in all three races this weekend.

The series will head to Winton Motor Raceway on September 1-2 for the penultimate round, where the Jim Richards Endurance Trophy will be decided. Tamasi took his Holden Calibra to second in both heats to take the round but trailed in the wake of Dunlop Super2 Series driver Randle.

After being stripped of his Race 1 win for a tyre infringement, Randle scythed his way from the rear of the grid to win Race 2 setting a new lap record with a 1:07.3284s in the process.

The benchmark eclipsed the previous best by 0.2s set by Jack Perkins in 2015.

Randle then repeated the feat in the final race.

Tamasi leads the standings by 54 points ahead of the final round at Phillip Island from November 24-25. David Barram proved the man to beat at Queensland Raceway after completing a clean sweep of the Australian Prototype Series round.

After taking out yesterday’s race from pole position, the Chiron LMP3 driver was rarely threatened on the way to victories in today’s two heats.

Murdoch pulled off an impressive overtake around the outside of Laucke at the final corner of the last lap to claim the final spot on the podium.

Makris managed to pull away from Laucke and Murdoch in the battle of the minor podium places in Race 3.

Murdoch took advantage of a mechanical drama for Laucke to secure another third place finish.

While Barram took out the round, Makris extended his series lead to 85 points over Jean Paul Drake, who finished sixth in Race 2 before retiring from the final encounter.

The Australian Prototype Series heads to Sydney Motorsport Park from September 21-23 for the penultimate round of the season. Giblin got the better of Parrish in Race 3 which was enough to take out the round win from the latter and Wilson.

The next round of the Series X3 Queensland will be at Morgan Park as part of the CAMS Queensland Circuit Racing Championships on September 8-9.