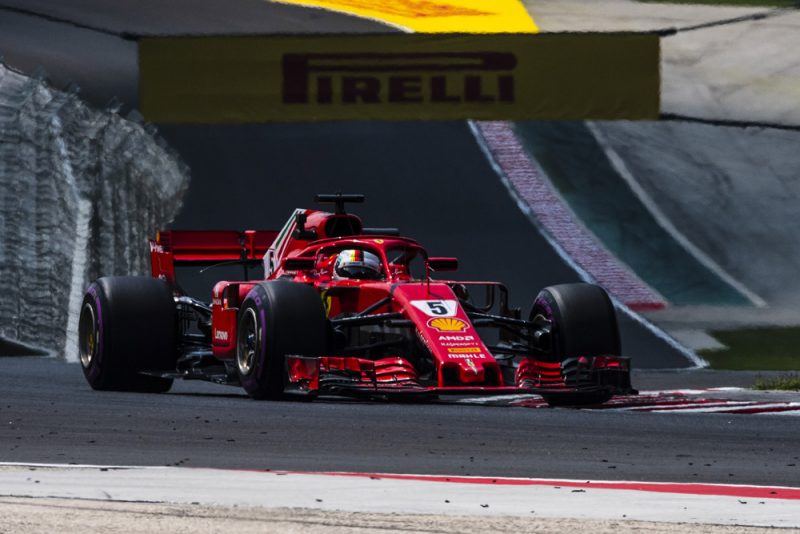 Sebastian Vettel topped Practice 2 at the Hungaroring to end the opening day’s running fastest ahead of Sunday’s Hungarian Grand Prix.

The Ferrari driver narrowly edged out Max Verstappen’s Red Bull to end the day on top, having been second fastest in the day’s opening session.

Third fastest was Daniel Ricciardo, who had topped the earlier session over Vettel which saw the top three split by less than a tenth of a second.

Lewis Hamilton was the lead Mercedes driver with the fifth fastest time in both sessions, falling from four tenths off the pace in FP1 to three quarters of a second in FP2.

The afternoon’s quicker times came amid hot conditions as drivers performed their qualifying simulations midway through the 90-minute session.

Teams then switched focus to longer runs in an effort to bed down their race strategy.

A problem in opening practice saw Nico Hulkenberg out late in FP2, the team electing to change the German’s energy store.

It meant the Renault driver missed almost half of the second session, completing the fewest laps of any driver en route to 14th fastest.

Renault and Haas looked closely matched at the head of the midfield pack, with Romain Grosjean seventh fastest to take the mantle of best of the rest behind the leading three teams across both sessions.

Antonio Giovinazzi filled Charles Leclerc’s seat at Sauber during opening practice, the Italian the only test driver to take part in the day’s proceedings.

Across the garage, Marcus Ericsson found himself under investigation for an unsafe release late in proceedings after he was called to stop at the end of pit lane.

Both Williams and McLaren struggled, Stoffel Vandoorne in particular languishing down the order some half a second off team-mate Fernando Alonso in FP2 before blowing out to eight tenths in FP2.

The Belgian’s lack of pace in the afternoon was a result of a spin during his qualifying simulation, leaving his fastest lap a time set on the soft compound tyres.

The hot conditions are expected to remain though a chance of rain is set to increase moving towards qualifying on Saturday.

Sunday’s race however is expected to be dry, placing an emphasis on tyre preservation as temperatures soar beyond 30 degrees.