FFord leader in race for US scholarship

FFord leader in race for US scholarship 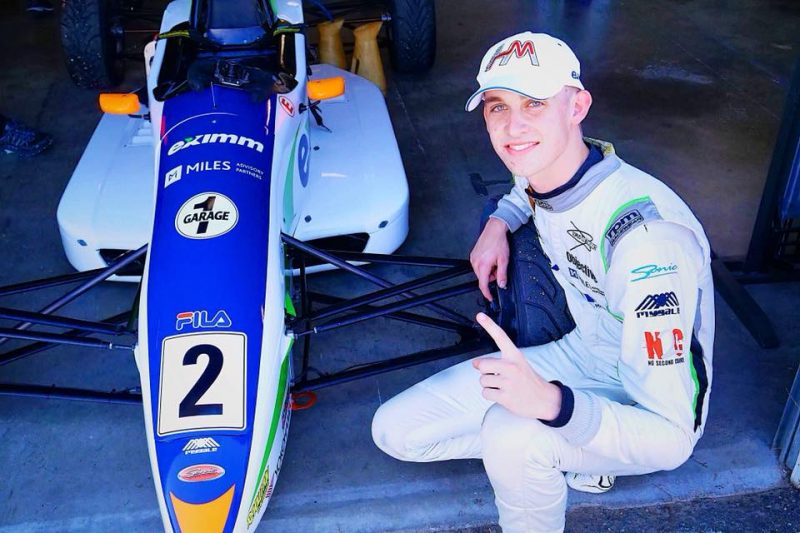 Australian Formula Ford Series leader Hunter McElrea is in contention for a scholarship which would see him contest two Formula Ford events in Britain and potentially move into USF2000.

McElrea is eligible for The Team USA scholarship which is available only to US citizens having been born in California.

The scholarship offers two drivers starts at the Formula Ford Festival at Brands Hatch and the Walter Hayes Trophy at Silverstone, as well as a berth in the Mazda Road to Indy (MRTI) $200k USF2000 Scholarship Shootout.

Proceedings continue this weekend at the Mid-Ohio IndyCar round, for which USF2000 is the first step on the ladder, with a series of interviews with the candidates.

McElrea, son of Carrera Cup and Australian GT team owner Andy, is not able to be among them but has submitted a video instead.

He told Speedcafe.com that he was encouraged to apply by scholarship president/founder, broadcaster Jeremy Shaw, having impressed in a USF2000 test in October last year.

“I kind of got approached to apply and I wasn’t expecting it so I was like, ‘That’s cool,’” said McElrea.

“I knew of (the scholarship) from all the people that had been through it and IndyCar drivers who had won it.

“I was kind of happy, even now, just to be recognised and get the call-up to be where I am now; it’s good.

“I’m guessing (Shaw) knew of me from the test I did at the end of last year and then followed me throughout this year.”

Following the interviews, the field of aspirants will be reduced to six to contest a shootout at an as yet undecided venue later in the year.

McElrea, meanwhile, extended his Formula Ford series lead to 29 points after Round 4 of seven last weekend despite a below par outing by his 2018 standards.

A series win represents another means of qualifying for the USF2000 scholarship and a start in the MRTI ladder.

“It’s going really good; I’ve won eight out of the 12 races and ‘poled’ three out of the four,” the Melbourne-based Kiwi, who drives for Sonic Motor Racing, noted.

“I had a little mistake in Sandown when, on a Safety Car restart, I just braked too late (while leading).

“We came back in Race 2 and went from ninth to first, I broke the tow and pulled away by about five seconds, so that was my favourite race win of the year.

“The season’s been really strong so far but it’s still three months to go so I’m planning on doing the same; just approaching it race by race and hopefully keep increasing the championship lead.”

Round 5 of Formula Ford supports the OTR SuperSprint at The Bend on August 24-26.