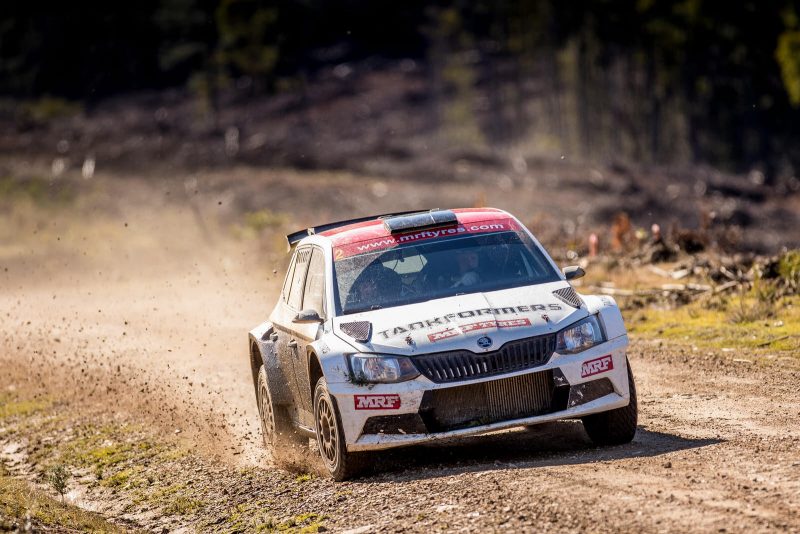 He and co-driver Ben Searcy took out all 10 of Saturday’s special stages around Launceston to win by over four minutes from Molly Taylor.

Evans and the Tankformers Skoda Fabia R5 therefore missed out only on Friday night’s super special stage which kicked off Heat 1 of Round 4 of the season.

“We had a really great day today, to win every forest stage today is something I am pretty proud of,” he said.

“We were happy with our pace, we were substantially faster than the rest of the field so very positive going into tomorrow.”

Taylor has had a patchy run of late and was pleased to bag a solid result in changeable conditions in the Subaru do Motorsport Subaru WRX STI.

“Really, really good day for us, really, really challenging, we found it quite tricky out there to get a good rhythm,” said the 2016 champion.

“The conditions and grip level seemed to change on every corner but we enjoyed the challenge. Some awesome bits of road out there, it’s pretty fun.”

Others who would have been expected to be prominent, however, battled.

Launceston local Steve Glenney, the only other stage winner so far, came unstuck on the day’s second stage and slid the Contel Communications Subaru WRX STI off the road.

He resumed after the midday service but was the last classified finisher.

Harry Bates should have figured near the head of the classification but dumped 14 minutes on the day’s first stage when the Toyota Genuine Parts Toyota Yaris AP4 was hit by electrical problems and ultimately finished eighth.

Heat 2 takes place tomorrow with running in the Retreat Forest, north of Launceston, before a return to the Lisle State Forest for the final stage.