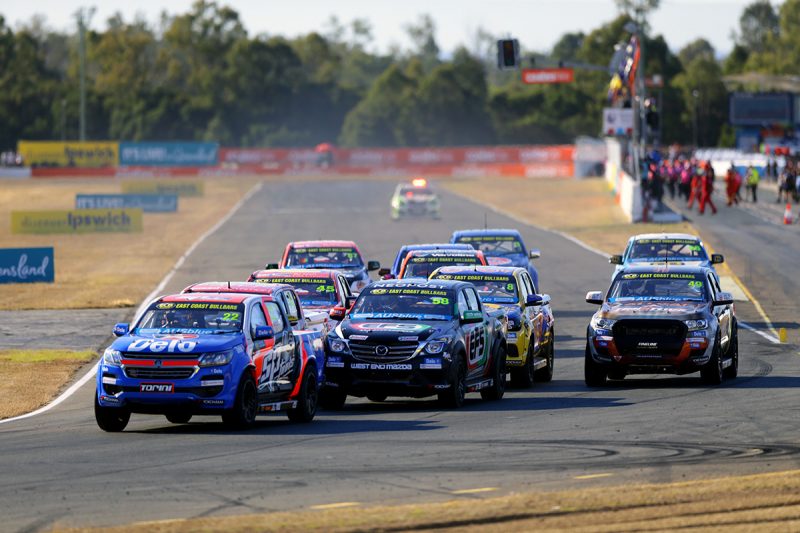 The SuperUtes at Queensland Raceway

ECB SuperUtes Series team owners have reiterated their commitment to racing diesel-powered utes despite rumours of a push to revert to V8s.

Team owners met during Round 4 of the inaugural season at the Coates Hire Ipswich SuperSprint where the topic of engines is understood to have been a significant item of discussion.

The new category has been met with stinging online criticism of the low speeds compared to the V8 Utes which it replaced, small grids, and the diesel engine note.

Reliability has also been a recurring issue, although seemingly less so in the most recent round at Queensland Raceway.

While V8 engines are an obvious remedy, team owners which Speedcafe.com has been able to contact were steadfast in their support of diesels for the foreseeable future.

“I think (the meeting) was called to discuss all the rumours going around and just to get some clarification on what all the team owners thought about the direction of SuperUtes,” Peters Motorsport team manager Brett Peters told Speedcafe.com.

“No, I don’t think so, and neither did anybody else,” he added when asked if a switch to V8s would occur.

“I don’t know where it all originated from but everybody seemed to be starting to talk about it and we’ve all just invested a whole lot of money into a race series that’s only at the time in its third round.

“We just wanted to find out about it and everyone agreed that we simply need more cars and there’ll be nothing wrong with this series.

“From the race you just saw (Race 1 at Ipswich), if you have 24 of those things out there, it’ll be ute racing back to the old (days), and that’s where ute racing fits in.

“Ute racing got to its popularity because it was rough, tough, hard racing with full field; why do you have to go and put a V8 in it?”

Ranger Racing owner Michael Formosa, which campaigns the sole Ford Ranger for son Christopher, was of a similar mind.

“I heard it during this week and when we had the team meeting it was mentioned but I think we need to move forward with what we’re doing at the moment,” Formosa told Speedcafe.com.

“It’s what the market is, it’s what the manufacturers put out, and I think we need to give this a good go before we even think about going down the V8 path.

“We all sort of agreed that this format is the correct format and we’re only into Round 4, and even when the V8 Utes started they were having issues for the first couple of years.

“You’re going to have issues every time you go into a new format, we’re at the forefront of what we’re doing, there’s nobody in Australia who’s tackled anything like this before, and all the gremlins are starting to be solved.”

Luke Sieders, whose Sieders Racing Team runs two Mitsubishi Tritons and three Toyota Hiluxes including the two Western Sydney Motorsport entries, played down the significance of the meeting but backed up the view that there would be no change.

“I think it was more just a get-together because we’ve heard the rumours,” he told Speedcafe.com.

“I don’t think there are too many team owners that are too hell-bent on going to the V8 or anything so we just wanted to touch base because we’re all starting to invest in the whole diesel aspect of it at the moment.”

When asked about the cost of a potential change to V8s, he responded, “I would imagine it would be quite expensive, it wouldn’t be an easy process, and would it be viable? Probably not.”

Category manager Kurt Sakzewski also confirmed that Supercars has no plan to alter the current formula.

He said that ongoing efforts to grow the size of the grid, which has numbered 10 to 11 cars for each of the first four rounds, was vindication that existing team owners were happy with the direction of the series.

“It was partway through the series so we got everyone together to basically review the season to date and also look forward to next year because it’s at that time of year where we’ve got to start thinking about next year and calendars and all that sort of thing,” Sakzewski told Speedcafe.com of the meeting.

“A number of items were discussed around potential changes. It’s no secret that people have been talking about the idea of putting a V8 engine into the current SuperUte and that was discussed but there are no plans to do so.

“Supercars and the teams are all committed to the turbo diesel format and we’re pushing ahead and just working on growing the grid.

“The bulk of the meeting was around how we can achieve that, what things the teams can do, and what Supercars can do.

“That was the real focus for the bulk of the meeting, but it’s good to see that it was the focus from everybody in the room; that’s what we’re looking towards.”