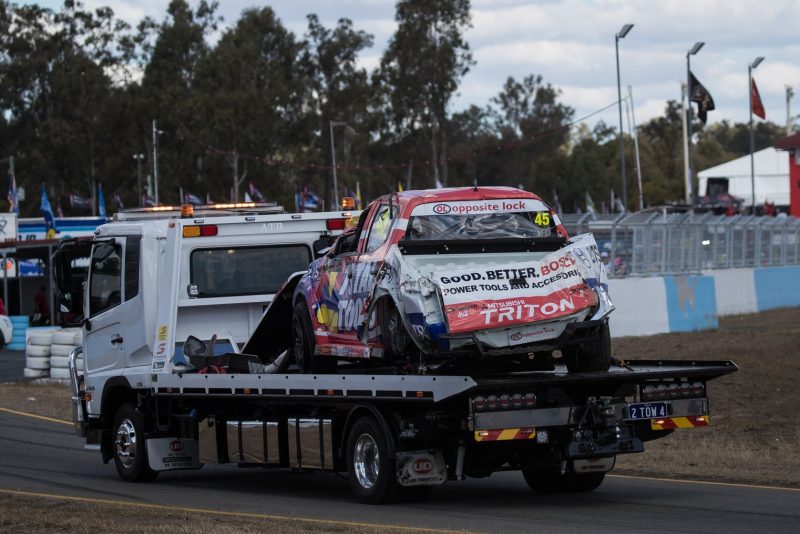 Supercars is reviewing the design of the SuperUtes after two separate incidents in which rear wheels and axles came free at Queensland Raceway.

A wheel from a Mitsubishi Triton was flung high into the air during Mick Sieders’ spectacular Race 3 rollover, with social media video and photographs revealing that it landed in a dam behind the Turn 2 spectator area. Earlier in the day, the left-rear wheel also parted company from a Toyota Hilux when Matt MacKelden made side-to-side contact with Steve Wilson’s Isuzu D-Max, rolling through a gravel trap before coming to rest against the tyre wall.

In each case, part of the axle remained attached to the wheel.

Both cars are Sieders Racing Team entries but the axle is one of a raft of control components in the category, and each of the six homologated models have similar rear-end packages.

Category manager Kurt Sakzewski has confirmed that Supercars is reviewing the incidents with a view to determining what, if any, modifications needs to be made to enhance the safety of the vehicles.

“The category is certainly looking at both incidents,” he told Speedcafe.com.

“We haven’t confirmed at this stage exactly what we’ll be doing moving forward but we are looking at both the ways that the rear end of the car is currently designed as well as if there’s any additional safety features we can be added.

“Anytime that we have incidents with our vehicles, we look at how they perform.

“Certainly, after the weekend seeing two incidents in which wheels did come free of the vehicle, that obviously immediately made it something that we had to look at as a category manager, so we’ve got straight onto that.”

Wheel tethers became mandatory in the Virgin Australia Supercars Championship during the 2015 season.

While not a failsafe, they notably kept the right-front wheel attached to Cameron Waters’ Ford Falcon when the Tickford Racing driver hit walls on both sides of the circuit after understeering through Adelaide’s Turn 8 sweeper earlier this year.

The tethers also kept three of the four wheels hanging onto Chaz Mostert’s Falcon in his horrific qualifying crash at Bathurst, just one event after their introduction.

When asked if tethers specifically are being considered for SuperUtes, Sakzewski reiterated that the investigation is ongoing and that any number of options are possible.

“It’s obviously been four days, so we’re looking at it, we’re considering all sorts of elements,” he responded.

“We’re looking at the design as well as whether there are any additional features that we can add but at this stage nothing’s actually been confirmed or locked in.”

The cars in question are not the first to break axles after Christopher Formosa’s Ford Ranger sheared through one during Round 1 in Adelaide.

That car, however, was one of the two series prototypes and the failure may therefore have arisen due to lack of experience to determine the operating life of parts.

It is also understood that other rear-end componentry was subsequently changed with a view to preventing a repeat of the failure.

“We’ve also had scenarios where people are setting their cars up differently and I guess treating them differently.

“Obviously one axle is not good; if something breaks more than once then we look into it more thoroughly and see if there’s any sort of connecting issue that might need to be addressed, but certainly at the moment the axles we’re running in those cars are pretty solid.

“We’re just looking at how it’s all put together and how it’s all running, so once we’ve got all the results from those investigations then we can confirm with the teams any upgrades that may be needed.”

Meanwhile, SRT is building a new Triton after the Race 3 crash but team owner Luke Sieders has confirmed to Speedcafe.com that the car which was rolled in Ipswich will be rebuilt at a later date.

The ECB SuperUtes Series continues with Round 5 at the Rabble.Club Sandown 500 on September 14-16.