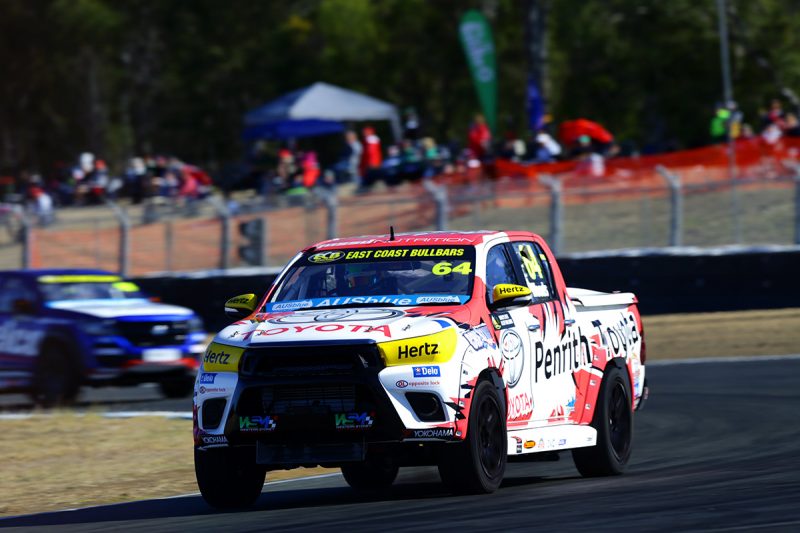 Craig Woods has been reclassified as the SuperUtes round winner at Queensland Raceway after his wife discovered he had been incorrectly timed a lap down in Race 2.

The ECB SuperUtes Series leader was recorded as finishing ninth in the reverse grid race but his Penrith Toyota-backed Hilux has been elevated to fourth having now been restored to the lead lap.

A number of cars had been erratically changing positions on the timing screens during the races due to transponders not being detected at some sectors.

While the #64 Western Sydney Motorsport entry had been suffering from overheating during the 10-lap race, a review of timing and race footage confirmed Woods did indeed complete those 10 laps.

He explained to Speedcafe.com that his wife Clare found the error two days after the Coates Hire Ipswich SuperSprint, which was supported by Round 4 of SuperUtes.

“She’s pregnant and her sleep patterns are a bit off and she was just going through something and she went, ‘Hold on a minute,’ and something stood out to her,” said Woods.

“She just investigated it a bit more and went, ‘That’s not right; they’ve got you down as a lap down in that race.’

Clare notified Supercars about the error and category manager Kurt Sakzewski has since confirmed the revision, which hands Woods a third round win and extends his series lead from five points to 10 over Ryal Harris.

“Car #64 was mistakenly shown as being one lap down and in ninth place. The correct finishing position for car #64 was fourth place,” Sakzewski told Supercars’ official website.

“As a result of the change in the finishing positions, the points allocation for the round have also been updated.

“We would like to congratulate Craig Woods for another round win.”

Woods went on the take out the final race of the weekend, in which stablemate Mick Sieders experienced a spectacular Lap 1 rollover, despite his starting position for that encounter also being adversely affected by the error.

“I’m laughing all the way to the bank,” he said of the final outcome.

The round trophies will be swapped over when SuperUtes races on the support category for the Rabble.Club Sandown 500 on September 14-16.