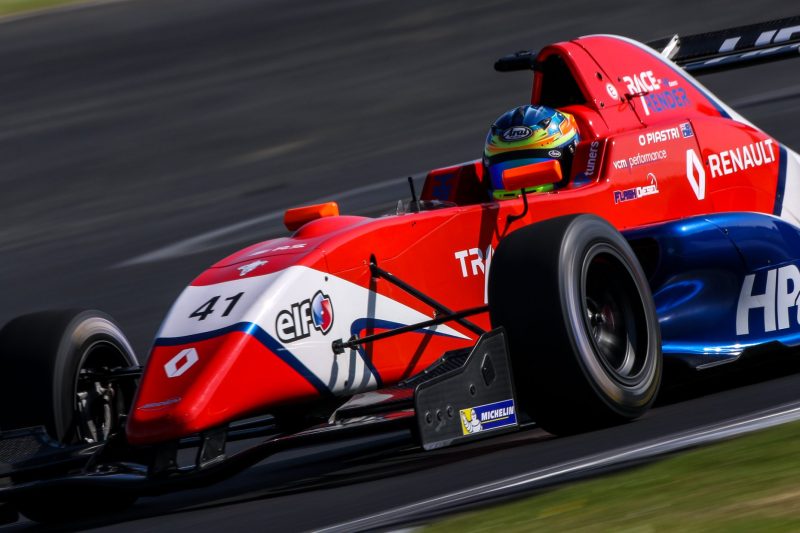 Arden’s Oscar Piastri was the best Australian as Formula Renault Eurocup returned from its European summer break at the Red Bull Ring.

Piastri finished sixth in Race 1 ahead of countryman Thomas Maxwell (JD Motorsport), who charged up to seventh before a red flag was thrown due to torrential rain falling around the circuit.

In Race 2, it was Alex Peroni (MP Motorsport) who came out top Australian, fighting through to cross the line seventh after grabbing 12th in Race 1.

Piastri ended up ninth in the second race of the weekend, fending off a late attack from Neil Verhagen, while front wing damage forced Maxwell out of contention while he was running 10th.

Max Fewtrell won Race 1 from pole, despite the downpour of rain, while Victor Martins took his first win in Race 2.

Round 6 takes place at Spa-Francorchamps this coming weekend (July 26-28). Race 1 saw Yuke Taniguchi and Alex Imperatori combined to claim their first victory in the series, moving up from sixth on the grid in their Nissan GT-R NISMO GT3.

Foster enjoyed a battled with Florian Strauss for second, the pair running side by side before the Australian edged his Ferrari ahead.

It left the Foster/Lester HubAuto entry second from the Strauss/Edoardo Liberati Nissan which had started on pole.

The Mercedes of Patric Neiderhauser and Nico Bastian won Race 2 after starting eighth on the grid.

A late charge saw the duo take the win over team-mates Raffaele Marciello and Alexander Mattschull, leaving the Lamborghini pairing of Marco Mapelli and Hiroshi Hamaguchi to take third.

The series moves to China next, with the penultimate round of the championship to be held at Shanghai International Circuit on September 22-23. Grove recovered after starting last on the grid following a combination of mishaps in qualifying, including a penalty issued to the Melbourne-based driver for missing the compulsory weigh-in after the session.

After running 15th outright early on in qualifying in tricky wet conditions, Grove dropped down the order when a number of drivers switched to slick tyres on the drying track and his team accidentally re-fitted wet tyres to his car.

In the race, however, the reigning Porsche Wilson Security Carrera Cup Australia class champion managed to make up four positions to cross the line fifth in Pro-Am and 29th outright.

Yelloly converted pole to a second win of the season in lights to flag fashion ahead of Mattia Drudi and Michael Ammermüller who rounded out the podium.

Porsche Supercup continues this coming weekend (July 27-29) at the Hungaroring when Grove will again take part. Hand took over the top spot from Jan Magnussen in the #3 Corvette, which led dominantly before the Dane’s 10-second lead began to fade in the closing stages.

An off-track excursion with 13 minutes on the clock ultimately saw Magnussen give up the lead to the #66 Ford, which stretched to an 11-second advantage at the chequered flag.

Magnussen and Antonia Garcia held onto second ahead of Kiwi Earl Bamber and Laurens Vanthoor at the wheel of the #912 Porsche 911 RSR which rounded out the podium despite a mishap in their final pit stop.

Paul Miller Racing grabbed GTD honours with the Bryan Sellers and Madison Snow-shared Lamborghini which romped to an 18 second victory over the nearest competitor.

IMSA heads to Road America next on August 3-5. Rusinov jumped the start and therefore copped a drive-through penalty, dropping the #26 entry down the order, but the combination of a mid-race Safety Car and mammoth stints from Vergne and Pizzitola brought the car back into contention.

Duqueine Engineering initially took second but was later excluded from the race due to a fuel irregularity.

This promoted the Racing Engineering Oreca of Norman Nato, Olivier Pla and Paul Petit to second ahead of United Autosports’ #22 car of Phil Hanson and Filipe Albuquerque.

Australian James Allen finished up 13th outright in the sister #40 G-Drive Racing LMP2 which he shares with Jose Gutierrez.

British outfit RLR Msport claimed the LMP3 class win in the hands of Rob Garofall, John Farano and Job van Uitert, with the team chalking up their second win of the season.

LMGTE went the way of the #88 Proton Competition Porsche of Matteo Cairoli, Giorgio Roda and Gianluca Roda, which took the lead early on in proceedings.

The European Le Mans Series will trek to Great Britain next for Round 4, the 4 Hours of Silverstone on August 17-18. Bartosz Zmarzlik won the British round of the FIM Speedway Grand Prix ahead of Tai Woffinden and Marciej Janowski.

Zmarzlik converted a rapid start into victory in the final and a healthy haul of 19 points from the evening.

Sydney native Chris Holder finished the event in ninth, leaving him 10th in the standings.

Current world champion Jason Doyle missed the semi-finals after a highside which saw the Novocastrian hospitalised.

Woffinden continues to lead the championship from Fredrik Lindgren heading into the Swedish round of the FIM Speedway Grand Prix on August 11.