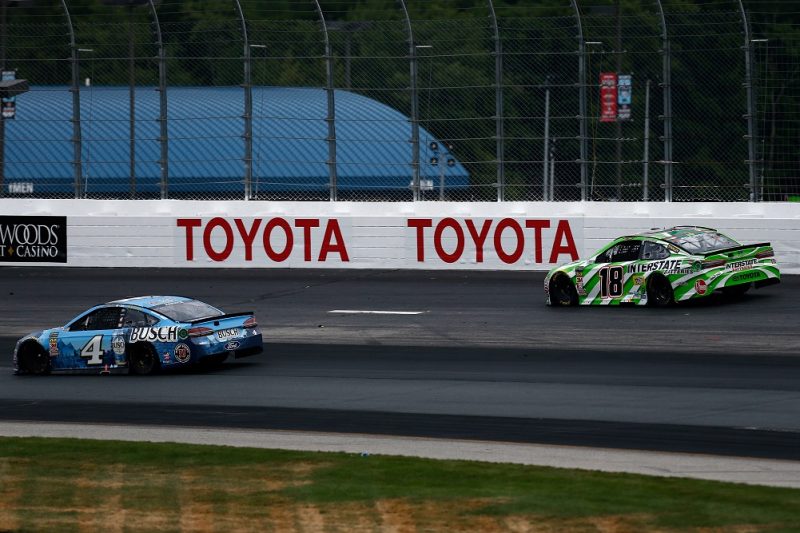 Kevin Harvick has won the New Hampshire NASCAR Cup race after bumping Kyle Busch out of the way with seven laps remaining.

Harvick went on to win by 1.9s while Aric Almirola made for two Stewart-Haas Racing cars in the top three, behind the #18 Joe Gibbs Racing Toyota of Kyle Busch.

Car #18 had in fact jumped from third to first, ahead of Harvick and previous leader Almirola, when Clint Bowyer’s (#14 Stewart-Haas Racing Ford) hit with the wall prompted what would be the final Caution of the race on Lap 257.

The final run to the chequered flag on Lap 301 developed into something of a two-car battle for victory between Kyle Busch and Harvick.

A touch from Harvick through Turn 1/Turn 2 on Lap 295 moved Kyle Busch up the race track and proved decisive as the #4 Ford led for the rest of the race.

Almirola enjoyed two separate spells in the lead earlier in Stage 3 but a poor pit stop dropped him back onto the second row for the final restart.

He made a poor launch when the green flew again on Lap 262 and quickly dropped to sixth position but rebounded to finish a season-best third.

Martin Truex Jnr was among those to pass Almirola at the restart but couldn’t go with the other two members of this year’s ‘big three’ and ultimately finished fourth in the #78 Furniture Row Racing Toyota.

The 2017 champion took at Stage 1 and led until Lap 132, during Stage 2, after which he ran in a prominent position but not in the lead again.

Chase Elliott, the Stage 2 winner, had a battle for fourth with Almirola inside the final 30 laps before finishing fifth in the #9 Hendrick Motorsports Chevrolet.

Pole-sitter Kurt Busch led from the start of the final stage until the #41 Stewart-Haas Racing Ford was passed by Almirola on Lap 212.

He dropped back to 12th in the final run to the finish before taking the chequered flag in eighth.

The race had begun three-and-a-half hours later than planned due to rain, and there was a Competition Caution to allow crews to assess tyre wear after 35 laps.

Despite reports of rain late in the piece, proceedings were otherwise unaffected.

Kyle Busch retains the series lead although Harvick’s win moves him ahead in terms of playoff points after the Foxwood Resorts Casino 301.

The series now heads to the ‘tricky triangle’ for Round 21, the Gander Outdoors 400, at Pocono Raceway on July 27-29 (local time).

Replay: Harvick passes Kyle Busch with a bump and run