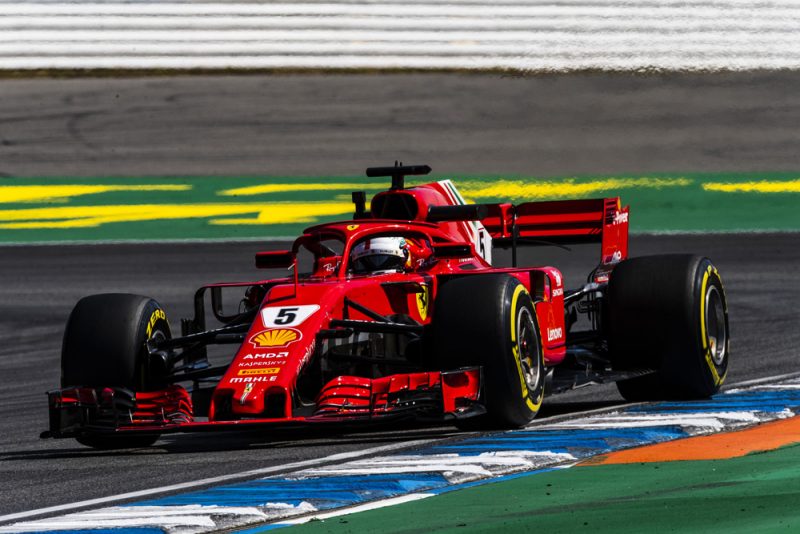 Sebastian Vettel has claimed pole position for the German Grand Prix in a dramatic qualifying session that saw Lewis Hamilton forced out of the session early.

A traffic jam at the end of the session compromised the start to Bottas’ final flying lap as Kevin Magnussen backed off to create space for his own final effort.

Raikkonen dropped a wheel at the exit of the final turn to set the second fastest time, only to be demoted to third when Bottas flashed across the line seconds later.

The Mercedes driver’s joy was short lived as Vettel banked a 1:11.212s to claim pole position.

Max Verstappen was fifth fastest, the sole Red Bull representative in the ten, ahead of the two Haas drivers, Magnussen in front of Romain Grosjean.

The top 10 was rounded out by Nico Hulkenberg, Carloz Sainz, Charles Leclerc, and Sergio Perez.

Hamilton had a ragged opening to the session, twice leaving the circuit in pursuit of his first timed lap before finding his car stuck in fourth gear at the end of Qualifying 1.

Unsurprisingly, he was forced to admit defeat, and despite having set a time easily good enough to progress the dejected Mercedes driver was forced out of the session and will start 14th.

A single flying lap for Daniel Ricciardo was the sum of the Australian’s participation in qualifying.

Resigned to starting last on the grid owing to his power unit penalties, the Red Bull driver needed to do nothing more than record a time to confirm his participation in Sunday’s race.

Ricciardo’s lap proved enough to progress through to the second part of the three-part but he took no further part in qualifying to end up 15th.

A spin for Marcus Ericsson left the Sauber driver lucky to continue in Qualifying 2 after finding himself in the gravel at the Sachskurve.

Though he was able to extract himself from the gravel it deposited a significant amount of it on the racing line, and ultimtely drew the red flag to allow marshals to sweep the circuit clean with seven minutes left in session.

A flurry of late activity saw Fernando Alonso eliminated in 11th, while Sergey Sirotkin, and Ericsson were also eliminated.

During Qualifying 1, Stoffel Vandoorne reported a problem with the gear shifting in his McLaren, the Belgian limping around the lap before returning to the pit lane.

Though he returned to the circuit, Vandoorne ended the session slowest of all.

He was joined on the sidelines by Esteban Ocon, both Pierre Gasly and Brendon Hartley for Toro Rosso, and Lance Stroll’s Williams.