MW Motorsport’s recent dominance of V8 Touring Cars has continued on the final day of the Coates Hire Ipswich SuperSprint with wins for Tyler Everingham and Zak Best.

In Race 2 of the weekend, Everingham converted first position on the grid into an all-the-way victory in his #27 FG Falcon.

Best lost second position to Jon McCorkindale into the first corner but reclaimed it at the start of Lap 4 and finished runner-up to his team-mate.

Both MWM cars were slow off the line for Race 3 and McCorkindale pounced through the opening corners.

His lead lasted only until Lap 2, when Best got past, but Everingham took another two laps to do so and by then his hopes of a Queensland Raceway sweep were dashed.

McCorkindale finished 6.7s back, and third to the young guns for the third time in as many races.

Best claimed the round on a countback, his first overall weekend win in V8 Touring Cars, and trails series leader Everingham by just nine points heading to the finale at the OTR SuperSprint in Tailem Bend on August 24-26. Blake Sciberras and Joel Heinrich took the wins in two hectic races to wrap up Round 4 of Aussie Racing Cars.

In Race 4, Justin Ruggier started from top spot and led until Paul Morris got a run on him through Turn 6 at the end of Lap 1.

The Safety Car was called on Lap 4 after Charlotte Poynting’s car came to a halt on the circuit, at which time Morris led again having briefly been headed by Kyle Ensbey.

Despite an off after contact with Ruggier on Lap 2, Heinrich was still in contention for the win and sat third for the restart on Lap 7, behind Sciberras.

Heinrich and Morris traded the lead back and forth before Sciberras jumped from fourth to first as the leaders went four-wide into Turn 4 on Lap 9.

Kel Treseder, who had started 16th, then nabbed Sciberras at Turn 5, but Heinrich got underneath him at the start of the 10th and final lap with a move which proved decisive.

It would be Ruggier who would take second, from Treseder, Morris, and Sciberras.

Earlier, Sciberras led Race 3 at the end of the opening lap despite starting fourth, and gapped the field as a battle for the minors broke out behind him.

Round 5 supports the OTR SuperSprint at The Bend on August 24-26. 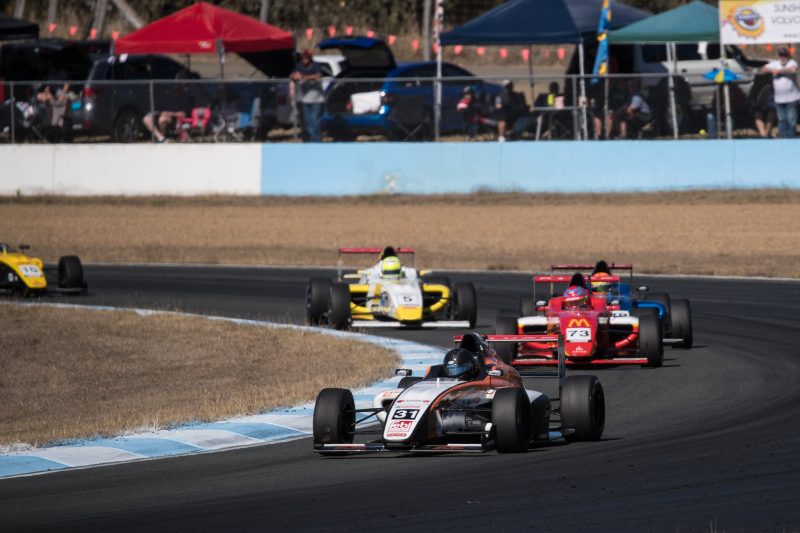 Pole sitter Lachlan Hughes held the lead off the line in the morning’s race, only do drop down the order and the field headed down the back straight.

It promoted Ryan Suhle to the race lead, with Ojeda moving from fifth to second on the opening lap.

The pair nose to tail in the early stages, Ojeda driving around the outside of Suhle at Turn 3 on Lap 5.

Suhle then fell back into the clutches of Aaron Love, but was able to hang on to finish second and third respectively behind Ojeda.

Another win the the final race rounded out a perfect weekend for Ojeda, who banked 75 points for his weekend’s efforts.

Despite running close together throughout the 13 laps race, Cameron Shields fended off Love, who was forced to settle for third behind Shields and race winner Ojeda.

Formula 4 next heads to Winton with the Shannons Nationals on August 31-September 2.