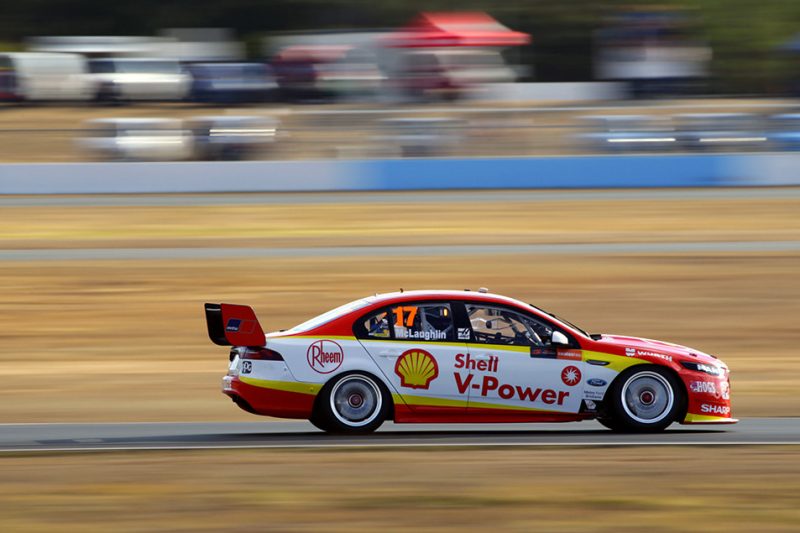 Scott McLaughlin has scored a 10th Armor All Pole of the season in qualifying for Race 20 at the Coates Hire Ipswich SuperSprint.

McLaughlin will square off with Shane van Gisbergen on the front row, while Chaz Mostert was a late improver to third on the grid.

The #17 Shell V-Power Racing FGX Falcon was top of the timing screen after each of the field’s three runs through qualifying.

McLaughlin lowered the benchmark from 1:08.5504s to 1:08.4900s, just short of his 12-month-old practice record at Queensland Raceway, with his final flyer.

That was just as well given that van Gisbergen would subsequently clock a 1:08.5382s in the #97 Red Bull Holden Racing Team ZB Commodore.

“(The) Car was a bit looser today, it was a bit harder, so we need to work on that but I think we’ve got a really good shot today.”

“I think we made some progress over night,” he noted.

“Studied hard and did what we could, so hopefully we can take the fight to them.

“Congrats to them, they got another (pole), but we’re in the fight. Hopefully we can have a good race and stay up there.”

David Reynolds’s #9 Penrite ZB Commodore underwent a shock absorber change before the final run and the 2017 Bathurst 1000 winner went on to qualify fifth, putting him alongside Rick Kelly (#15 Castrol Nissan Altima) on the grid.

Nick Percat completed only three laps on his way to 25th in the #8 Brad Jones Racing ZB Commodore, one position ahead of wildcard Kurt Kostecki (#42 Kostecki Brothers Racing VF Commodore).