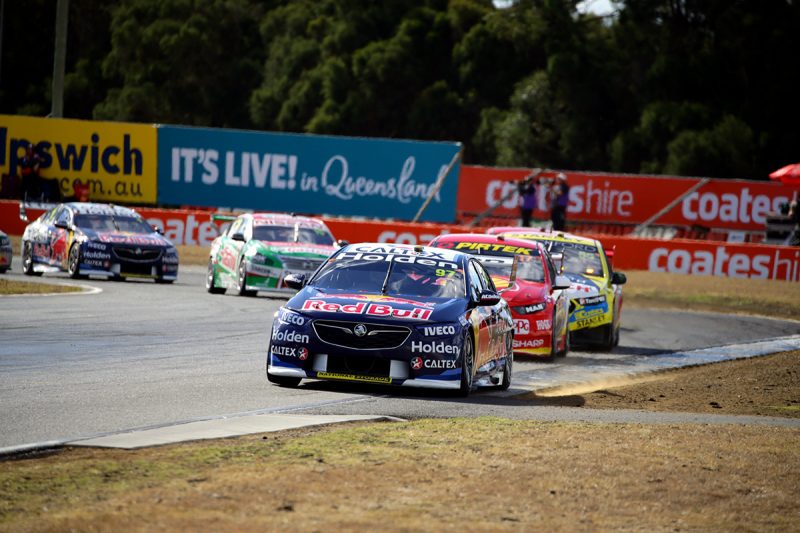 Shane van Gisbergen has attributed his Race 20 win at Ipswich to a ‘huge’ overnight qualifying debrief and another strong start.

Van Gisbergen came up just 0.0482s short of Race 19 winner Scott McLaughlin to earn the spot on the outside of the front row, six positions better than he had qualified a day earlier.

The qualifying outcome was a positive omen given that van Gisbergen had driven up to second in the first stint of Race 19 alone, and so it would prove to be as the Triple Eight driver got the jump and headed the field into the first corner in Race 20.

While the #97 Red Bull Holden came under early pressure from McLaughlin, van Gisbergen began to gap the #17 Shell Ford after around five laps.

He fell behind during the middle stint due to a later first pit stop and longer fuel fill than most around him, but still appeared quite likely to win until McLaughlin closed in late in the piece.

Van Gisbergen held strong at the head of the field and pulled away again to ultimately win by over two seconds.

The New Zealander believes that Armor All Qualifying played a critical role in the outcome of the race.

“I’ve said all along that if we start up there we can race with (DJR Team Penske),” he said.

“The cars are very even in race trim but we’re missing something in qualifying in the consistency.

“When we get (qualifying) right we’re on and as fast as them, but in racing we’re any bit as good as them.

“It was a huge effort last night; all three cars qualified pretty badly (for Race 19) and that’s all we focused on really.

“We knew we were good in racing and I think we turned up with a pretty good car in qualifying trim.”

Having explained the day before how a design change has made him more comfortable with his starts, van Gisbergen was again smartly off the line to take a clear lead to the first corner.

He and engineer Grant McPherson held their nerve as McLaughlin opted for an undercut to gain the lead before #97 reclaimed top spot after the second pit stop cycle.

“(The start) dictates the race and then we knew that if we got in front, Ludo (Lacroix, McLaughlin’s engineer) would be pretty aggressive and it was tempting to react,” said van Gisbergen.

“We had a bit of a brief conversation about it but as we saw in the third stint, the cars are very, very even and Scotty would get to me and then get hot and drop off.

“It would have been the other way around if I was behind him; we needed to get the start.

“It was hard to stay out and let them (gain time) –I could see them on the other side of the track gapping us on lap time, which is a little bit frustrating – but had to be patient and hope for no Safety Car in the middle (stint).”

McLaughlin agreed that the start was crucial, before explaining that it was too difficult to come from behind in the closing stages.

“I think we just didn’t get the start and then eventually once we got to him the tyres got hot and I just didn’t really have anything.

“I think we had the pace probably if we were in front, we probably could have either kept the gap like he did or pulled away.

“It was a tough race but consistent. I felt like myself and Shane had probably the two best cars and we both maximised it today.”

The mirroring of the Race 19 top two in Race 20 means that McLaughlin’s advantage over van Gisbergen at the top of the table is unchanged relative to the start of the weekend at 131 points.

Round 10 of the Virgin Australia Supercars Championship is the Red Rooster Sydney SuperNight 300 on August 3-4.