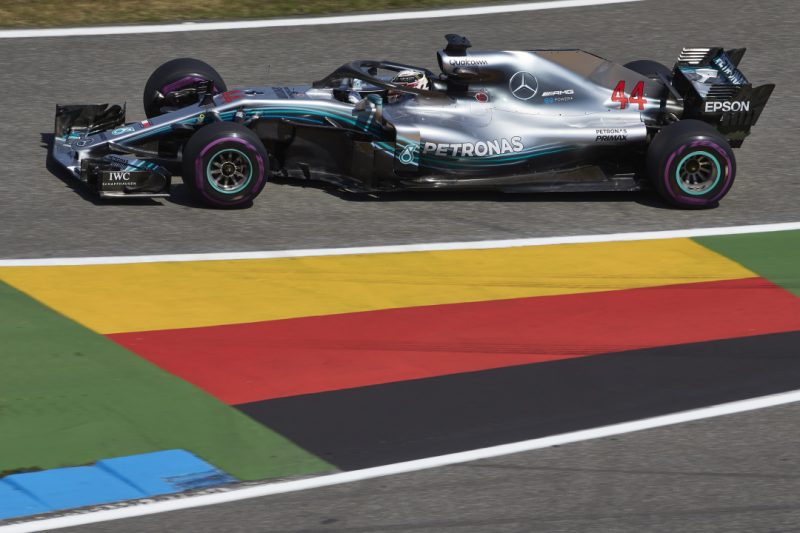 Lewis Hamilton cut a dejected figure following qualifying for the German Grand Prix at Hockenheim after a hydraulic failure left the Mercedes driver stranded on track.

Hamilton will start Sunday’s race from 14th after he was forced to stop his car on track at the end of Qualifying 1, leaving the Englishman pessimistic about his chances of recovery.

“On a track like this, not really, no,” Hamilton responded when asked if he can fight back from his comparatively low grid spot.

“This is one of the worst ones for overtaking, so I’ll do what I can from there.”

Despite an uncharacteristically untidy session that saw him twice leave the road, the four-time world champion had set a time good enough to progress to Qualifying 2.

It was during his second excursion where Hamilton looked to bounce heavily over a kerb immediately before his car struck problems.

Hamilton though dismissed the connection.

“You use the kerb the same every lap,” Hamilton said.

“I got to the kerb, and just before the kerb I think the steering broke, so that was the issue.”

Toto Wolff elaborated on the problem, suggesting the failure was a result of bouncing over the kerbs.

“The issue was we seem to have damaged a bit in the car, jumping over the kerb that caused a hydraulic leak,” Wolff told Sky Sports.

“The car is just coming back so we need to check whether that was really the case.”

The result of the failure saw Hamilton stuck in fourth gear, initially trying to limp the car home before instruction from the pit wall saw him park the car to protect the power unit.

“I didn’t really understand what had happened, so in my mind I’m like get the car back to the track,” said Hamilton.

“But they asked me to turn the car off, so I jumped out and I was trying to push it back.

“I wanted to try and see if I could push it back. It was so far to go and I saw there was leaking oil and everything. I knew I had to stop and let them put the car away somewhere.”

Hamilton’s championship rival, Sebastian Vettel, will start Sunday’s race from pole position with team-mate Valtteri Bottas alongside him on the front row.

The German Grand Prix is scheduled to begin at 2310 AEST on Sunday evening.