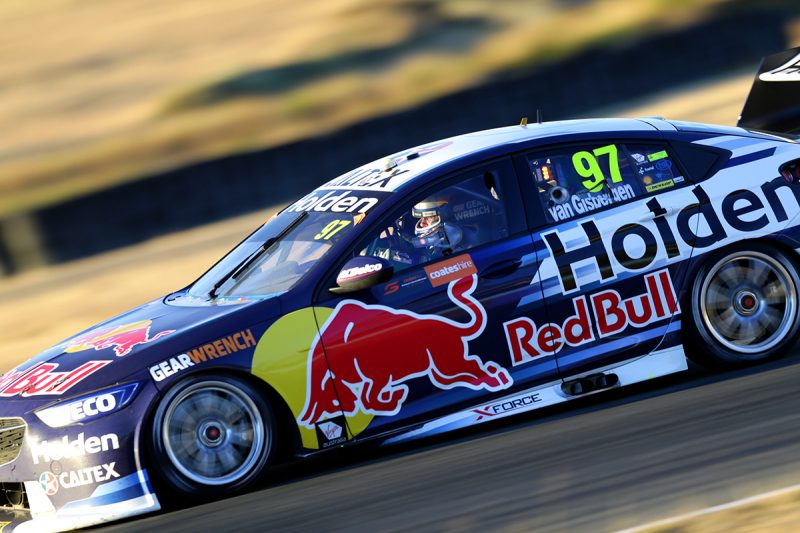 Shane van Gisbergen says that a design tweak in his car has helped him improve his starts after a charging opening lap in Race 19 at Queensland Raceway.

The New Zealander jumped from eighth to fifth on the run to the first corner, at which time he was already challenging David Reynolds for fourth.

He passed the Erebus Holden and Rick Kelly’s Nissan to sit third by the time the first 3.12km lap was done, setting up a damage limiting runner-up finish as championship leader Scott McLaughlin won the race.

Van Gisbergen has driven Triple Eight-built Commodores since joining Tekno Autosports in 2013 but claims to have not previously felt comfortable with the start system in those cars.

He says a recent design change, implemented two events ago at Hidden Valley, has helped in getting the #97 Red Bull Holden Racing Team entry away when the lights go out.

“It’s been a weakness until Darwin when we sort of changed it up a bit and did okay there and then did really good at Townsville, led clearly into Turn 1 (in Race 18), and today got a good one,” said van Gisbergen of his starts.

“I was always good at starts in motocross and junior formulas and at Stone Brothers most of the time, but since moving to Tekno I’ve been pretty (bad).

“The system that they use is not to my liking and I’ve never been able to use it but finally the design office was free to make something I wanted and we’ve fixed it; so far.

“It’s just a small thing but it’s creature comforts and it’s what you’re used to and it seems to be working so far.”

Team-mate Jamie Whincup, by contrast, lamented his poor getaway which saw Car #1 lose net one position over the course of the opening lap, and says that the team will look further into the issue.

“We had P6 to start the race, but the story was that we just got another shocking start, which really affected me,” said the defending champion.

“We’re just going to go through everything tonight, change the clutch and change all of the parts and see what happens tomorrow.”

Van Gisbergen went on to finish 4.3s behind McLaughlin and believes that his starting position made running down his compatriot unlikely due to the work he had to do in the first half of the race.

The 29-year-old had moved into second position when he passed the other DJR Team Penske Falcon of Fabian Coulthard on Lap 13.

He lost track position to Chaz Mostert and Craig Lowndes having pitted later before reclaiming the positions again on track.

“He was managing it,” van Gisbergen said of McLaughlin’s lead in the latter stages.

“I think I was too busy fighting the whole time. I had to wait for Fabian for 10 laps or whatever to go off and then I attacked him, but by that time Scotty had built a bit of a buffer.

“When we pitted I came out, had to use up the tyre to pass the guys, and then you could just see how straight Scotty was driving.

“So we were never on equal enough footing to see what each other had. He didn’t extend himself whereas I spent the entire time racing. I had fun doing it but the gap was a bit big.”

Van Gisbergen also lamented what seemed to be a relapse in Triple Eight’s qualifying struggles this year.

While the Red Bull cars locked out the front row last time out in Townsville, Whincup qualified sixth, van Gisbergen eighth, and Lowndes 10th for Race 19.

“We’ve had to do it too many times this year; poor qualifying and try and get through, come up with a strategy to get clear air, pass cars,” the 2016 champion said of the qualifying results.

“Qualifying’s the easiest time to pass cars and we haven’t been good enough at it all the time.

“I thought we’d really made some inroads. (The) Car felt good in practice on good tyres yesterday, and then all three cars sort of missed it a bit.

“We need to do our homework and just get it right. All the tools are there, the car’s good enough, the team’s good enough, we just need to make it happen and focus on the basics.”

The next Supercars session is Armor All Qualifying for Race 20, tomorrow at 1040 local time/AEST.