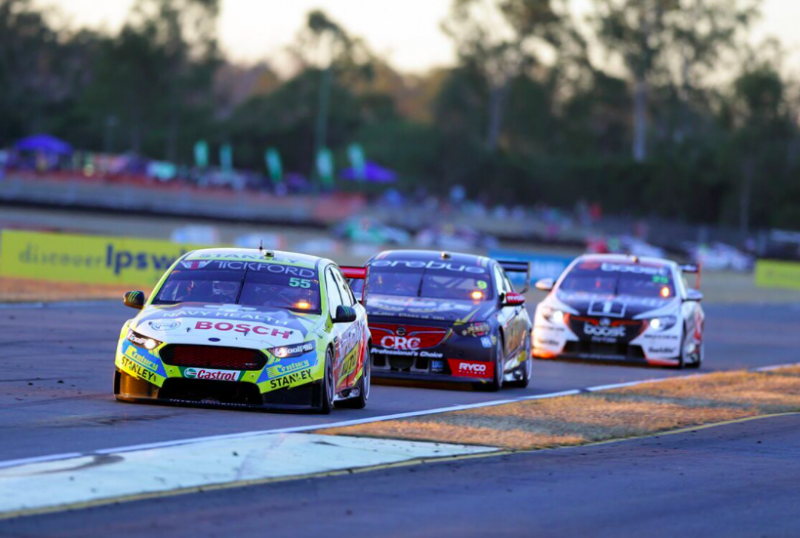 Chaz Mostert on his way to sixth

Chaz Mostert was relieved to bank another solid result in the books after recovering from ‘tough racing’ with Jamie Whincup to finish sixth in Race 19 at the Coates Hire Ipswich SuperSprint.

The Tickford Racing driver endured a day of mixed emotions but was ultimately happy to to race with the front runners having struggled for pace from his Falcon all season.

After finishing third in Friday practice, he went on to bag his first front row since the Gold Coast, 25 races ago, before stewards demoted him from second to fifth after he was judged to have impeded Shane van Gisbergen at Turn 6.

Mostert ran sixth early in the race before his day was hampered by contact with Whincup on Lap 3.

Whincup touched the rear of the Falcon on the entry to Turn 6 while fighting over the position, which resulted in Mostert falling to ninth, before Tickford employed an aggressive strategy.

After pitting early for only two tyres, he was able to undercut the majority of the field to slot into second but was unable to maintain the pace, crossing the line in sixth.

“I’m still anxious for tomorrow (Sunday) but relieved we got another good, solid day under our belts; I’m happy in Chaz camp,” Mostert told Speedcafe.com.

“To be honest the way our year has panned out sixth is a good result.

“I’m not looking at it as a bad result because we have been really struggling to get in that top 10.”

Reflecting on the clash with Whincup, the 26-year-old had no qualms over the incident.

“It was just tough racing and it is pretty hard to get past here,” he said.

“Having raced Jamie for the last few years he never wants to make contact and no doubt I probably was squeezing the gap to him quite hard.

“It is what it is. It is just racing.

“I didn’t get turned around and none of us got damage so I’m happy to go wheel-to-wheel when you can, that is what makes it exciting.

“Today I was on the wrong end of the stick and I ended up on the grass.”

While buoyed by his recovery to sixth and the on track performance in both qualifying and the race, Mostert is unsure if the squad has found the answer to its ongoing issues with his package.

“I’m not going to comment on that one,” he added.

“Only more results like today will restore the faith that we have found something.

“Under the skin we have been doing a whole heap of stuff in my car and changing the mindset of what we do.

“It was just nice to qualify and not be half a second off.

“At the start of the year when we were half a second off it was a hard pill to swallow. It is tough to take. There are a lot of great drivers in this pit lane.

“If all four of our cars were up the pointy end then we have definitely found something.

“I want to work on my car tonight and see if we can have a tune-up tomorrow.”

Mostert will return to the track tomorrow with Armor All Qualifying for Race 20 scheduled to begin at 1040 AEST.