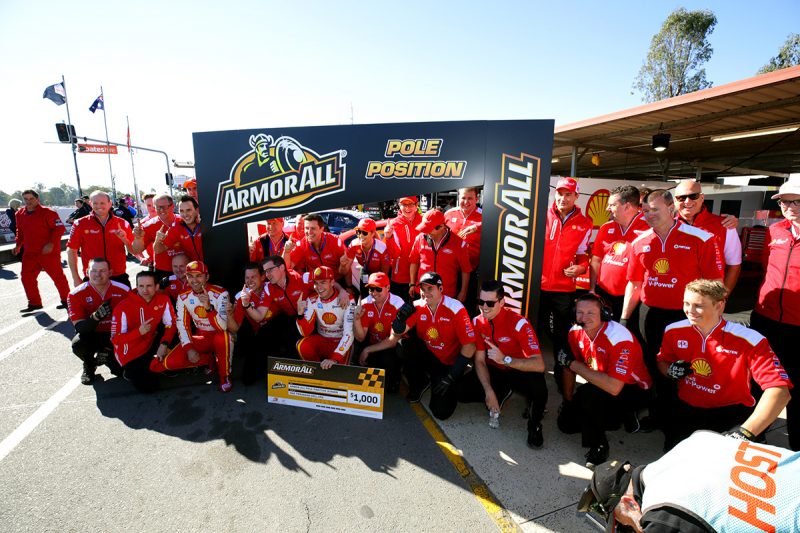 Scott McLaughlin edged Chaz Mostert to pole in Armor All Qualifying for Race 19 at Queensland Raceway but the latter faces an investigation into a baulking incident.

McLaughlin and Shell V-Power Racing team-mate Fabian Coulthard were first and second when the chequered flag flew before Mostert split them with a lap 0.1704s slower than the pole time of 1:08.5014s.

“We weren’t amazing in practice but we were there, but we just made a massive leap forward then.

“The car was fantastic and to have Fabs here as well with me (is) fantastic for the guys. A Ford one-two-three (as well), which is nice.”

Coulthard will share the second row with David Reynolds for Race 19 of the Virgin Australia Supercars Championship this afternoon.

The grid is, however, provisional as stewards are set to investigate a moment involving Mostert and Shane van Gisbergen midway through the session when the latter came up on a slow-moving Supercheap Auto FGX Falcon at Turn 6 while on a hot lap.

“(It was) One of those things,” said Mostert.

“I didn’t really see his headlights (denoting a flying lap) but I thought I’d still say quite wide out of the way.

“Gizzy’s always line ball with those type of things as well. Can’t do much about it.

“If he brakes any later than that he’s probably off the track. Try my best and hopefully they don’t take it off me.”

“Obviously not intentional to bugger him over if that’s the way it ends up going, I don’t like to do that.

“Fingers crossed we can hold onto that position. It was good to reward the team and no doubt we’ll see Gizzy out there in the race and have a good wheel to wheel battle like we always do.”

Van Gisbergen improved to eighth after the chequered flag in the #97 ZB Commodore, making for consecutive Nissan Motorsport-Triple Eight rows of the grid.

“I guess he didn’t see me or the team didn’t tell him; whatever,” said van Gisbergen.

“It didn’t look intentional but we were a bit out of phase. We didn’t do it on the first lap (of the run), we were doing it on the second, but I ‘m sure he didn’t mean it.

“But anyway, we weren’t quite good enough. Hopefully some clear laps would have helped too.

“I don’t know (how much time it cost), I haven’t looked at that stuff; definitely hurt us.

“We weren’t fast enough. I think it’s four and a bit tenths (slower than pole), so a fair way.

“We missed it a little bit today but hopefully the race is good and we can make the qualifying better tomorrow.”

Former team-mates Garth Tander (#33 Wilson Security GRM ZB Commodore) and James Courtney (#25 Mobil 1 Boost Mobile ZB Commodore) will square off from Row 6, while Will Davison was second-fastest of the Tickford-built cars in 13th in the #120 Milwaukee FGX Falcon.