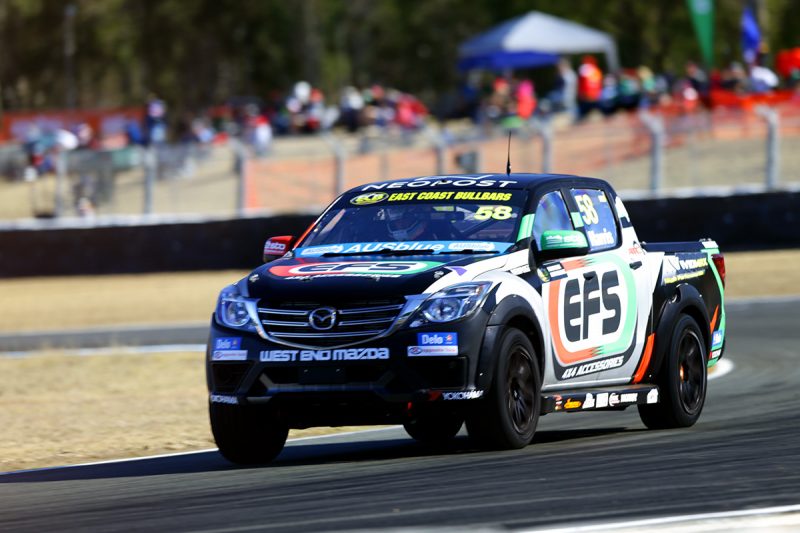 Ryal Harris passed Tom Alexander at half distance and then held off the Kiwi to win ECB SuperUtes Race 1 at Queensland Raceway.

Alexander led the field away from Armor All Pole Position as Craig Woods got inside of Harris, who started on the outside of the front row, into Turn 1.

Harris, however, hung tough on the outside of the Western Sydney Motorsport Toyota Hilux all the way through to the back straight, outbraking Woods at Turn 3 and reclaiming second position.

Alexander got around 0.8s ahead before Harris pegged back the Ross Stone Racing Holden Colorado with back-to-back fastest laps.

He got down the inside of the race leader at Turn 6 and Lap 5, where they made light contact as Harris made room for himself, and ran side-by-side down the front and back straights.

Harris cleared Alexander by the time they braked for Turn 3 but couldn’t drop him in the four-and-a-half laps which remained, and was instead handed a bad sportsmanship flag for blocking on Lap 7.

As the laps ticked down, Harris again played defensive in his Peters Motorsport Mazda BT-50, prompting Alexander to try several outside moves.

The New Zealander couldn’t pull any off, however, and finished just 0.1689s adrift after 10 laps.

Woods closed on the top two as they battled midway through the piece but never really threatened and remained third until the chequered flag.

Ben Walsh ran midfield early on but soon lost pace in his WSM Hilux and finished five seconds adrift of Wilson at the back of the 11-car field.

Harris has reclaimed the series lead from Woods ahead of Race 2 tomorrow at 0935 local time/AEST.