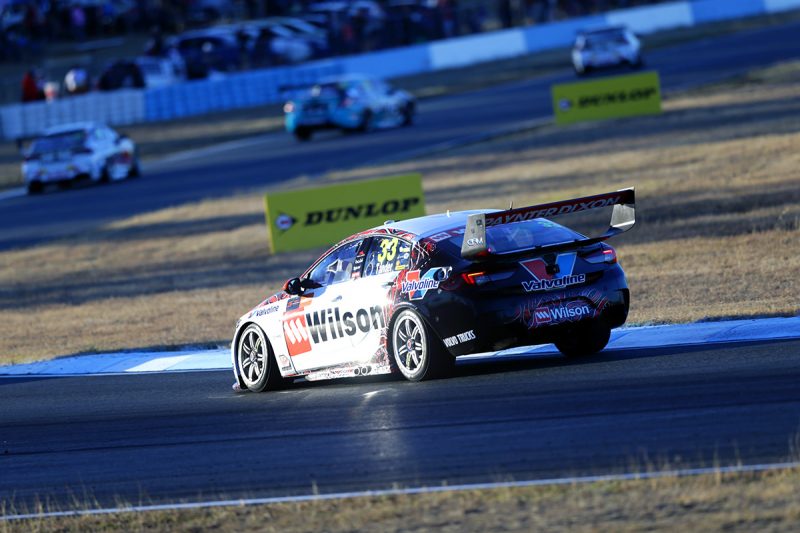 Garth Tander has revealed that he was delayed by an airbox fire during Race 19 of the Virgin Australia Supercars Championship at Queensland Raceway.

The Garry Rogers Motorsport driver suffered the issue on his way into pit lane for his compulsory pit stop at the end of Lap 20.

Tander had been third on the road at the time but effectively around 10th position, having maintained his starting position of 11th in the opening laps before overtaking Michael Caruso on the track.

The #33 ZB Commodore was 12th by the time the pit stop cycle had wrapped up at the end of Lap 27, during which Tander passed Rick Kelly in a spirited battle which went on for much of the Nissan Motorsport driver’s out lap.

Tander believes that the fire, which was not the first for GRM in 2018, cost him two to three seconds on top of a poor pit stop.

“We had a pretty good race car, we were making progress in that first stint and then on the in lap to the pit stop we had an airbox fire,” recounted the 41-year-old.

“It cost us about two or three seconds.

“We’ve had a few of them this year, it’s cost us quite a bit, so we need to speak to our engine supplier (Walkinshaw Racing) about that.

“And then our pit stop wasn’t great.

“In that pit stop cycle you need everything going for you because it’s so tight and we lost a bit of track position there.”

Tander went on to finish 11th having got by Richie Stanaway on the penultimate lap, while team-mate James Golding rose net one position to 18th.

Although some in front attempted an undercut during the 120km opening leg of the Coates Hire Ipswich SuperSprint, Tander says that the strategy observations of Saturday will not have significant implications for Sunday.

The 200km race compels each car to take on 120 litres of fuel during proceedings, necessitating at least two pit stops.

“There’s a lot more strategy involved with tomorrow with pit stop time and pit stop length, especially in that first pit stop, how much fuel you start with (as a fill).

“(You) Get a good idea on tyre deg(radiation) though, so you get an idea of your fuel stints for tomorrow.

“A fast car is all you need,” he added light-heartedly.

The Supercars field’s Sunday program begins with Armor All Qualifying for Race 20 at 1040 local time/AEST.