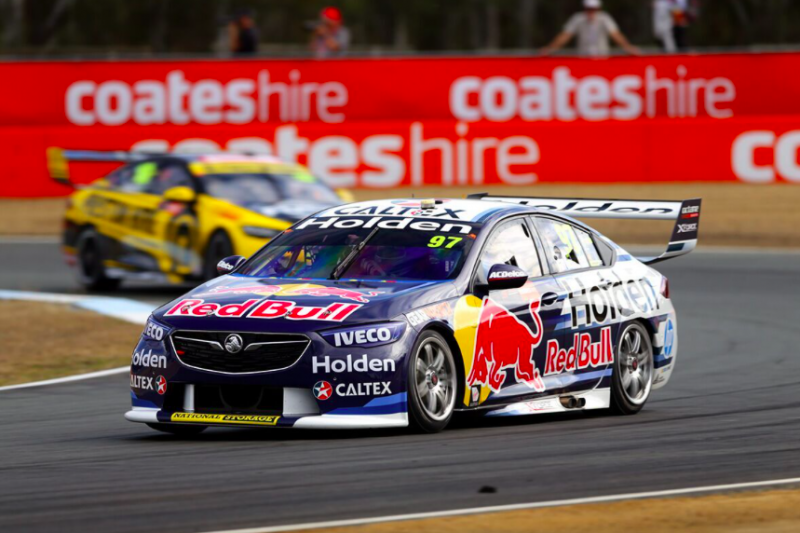 Shane van Gisbergen has edged Fabian Coulthard to top spot in Practice 2 on the opening day of the Coates Hire Ipswich SuperSprint.

Van Gisbergen clocked a 1:09.2447s after the chequered flag moments before his compatriot crossed the stripe only 0.0838s slower.

Van Gisbergen went just over a tenth of a second faster in the #97 Red Bull HRT ZB Commodore with the clock at zero before he was joined at the pointy end by the #12 Shell V-Power FGX Falcon.

“There’s been no wet races this year and we’ve finished all of them, so we’ve got no tyres left. Everyone’s in the same boat. So it’s just frustrating and then you put a better set on then a new set and ‘oh, the car’s good, all your problems are solved’.

“It’s very frustrating but it is what it is.”

Rick Kelly (#15 Castrol Racing Nissan Altima) and Mark Winterbottom (#5 The Bottle-O FGX Falcon) were slightly slower again in fourth and fifth, less than two tenths away from the very top.

Simona de Silvestro (#78 Harvey Norman Nissan Altima) was as high as fifth before settling in 11th.

Championship leader Scott McLaughlin suffered an electrical drama on his way to 12th in the #17 DJR Team Penske FGX Falcon, before running out of fuel just prior to the end of the session.