The two front row starters quickly broke away from the field, Treseder converting pole into the initial lead, and diced throughout.

Ensbey made the decisive pass with a textbook move into Turn 3 on Lap 7 and despite Treseder going deep onm the outside through the very last corner, the Uber Graphics car won by a nose after 10 laps.

The battle for third was similarly a two-way contest for much of the race between Western Sydney Motorsport team-mates Justin Ruggier and Blake Sciberras.

Paul Morris had also been in the fight early on but spun after contact with Ruggier on Lap 3.

Sciberras tried to go the long way around Ruggier at Turn 4/Turn 5 on the final lap but ran out of road on exit and had to settle for fourth, while Morris was ultimately 10th. The MW Motorsport pair of Tyler Everingham and Zak Best have finished first and second respectively in each of the two V8 Touring Car practice sessions.

The morning session proved to be faster due to showers just prior to Practice 2.

In the afternoon, Everingham could only get down to a 1:16.3582s after the MWM duo waited for the rest of the field to dry the track somewhat before venturing out in the final seven minutes.

Qualifying takes place tomorrow at 1045 local time/AEST before Race 1 at 1510. 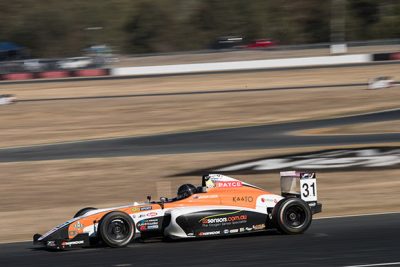 Jayden Ojeda was fasted in each of the day’s Australian Formula 4 practice sessions.

Ojeda topped a weather affected second practice after the on-and-off rain that had punctuated the morning finally closed in.

The field headed out of the lane on slick tyres before heavy rain saw them switch to grooved tyres.

It saw just three drivers set a lap in the first half of the 20-minute session before the rain began to ease.

Earlier, Ojeda topped the morning’s opening practice session, the faster of the two, with a 1:12.1821s which put him more than 0.4s up on Ryan Suhle.