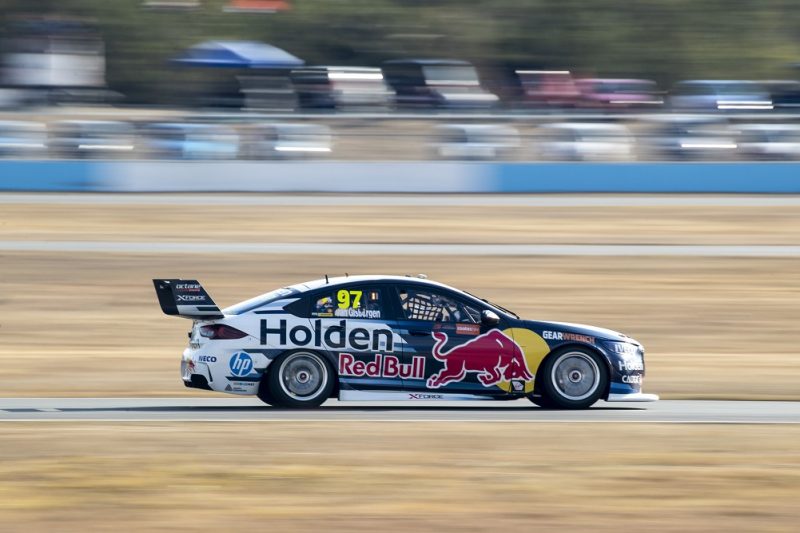 Shane van Gisbergen and Fabian Coulthard believe that Queensland Raceway does not afford a home track advantage to the local teams despite the two pacing Friday practice.

Van Gisbergen, who topped Friday practice in the #97 ZB Commodore after Whincup was quickest in the sister Red Bull HRT car in Practice 1, maintains that test day conditions are so far divorced from those of race weekends that there is no advantage for local teams.

“I don’t think there’s any such thing as a home track advantage here; it’s completely different to any test day,” said the New Zealander.

“There are so many other categories, on different types of rubber, so it feels like a completely different track; you may as well be going the other way.

“You’re starting from scratch basically with the set-up.”

Coulthard was of a similar opinion to his countryman, and pointed to the example of Chaz Mostert, who was third-fastest in practice in a Tickford Falcon.

“The field’s so competitive; regardless of who turns up, anyone can win on their day and I think the home track advantage isn’t a thing.

“We go to Winton (the Victorian test track), we’re successful; Chaz comes here, they’re a Melbourne based team, and today they’ve been successful as well.

“I think anyone can win on their day.”

The statistics back up their claims.

While Queensland teams went on a run of 11 wins in 12 races from 2010 to the Saturday in 2014, eight of those were taken out by regular contenders Triple Eight.

Of the eight races since, Melbourne-based squads Tickford Racing and Walkinshaw Andretti United have won four and one respectively.

Furthermore, until Scott McLaughlin’s Armor All Pole streak last year, Queensland teams had only qualified fastest for two of the preceding seven races.

There will be another 45-minute practice session tomorrow at 1120 local time/AEST before the next Armor All Qualifying session at ‘The Paperclip’ from 1325.