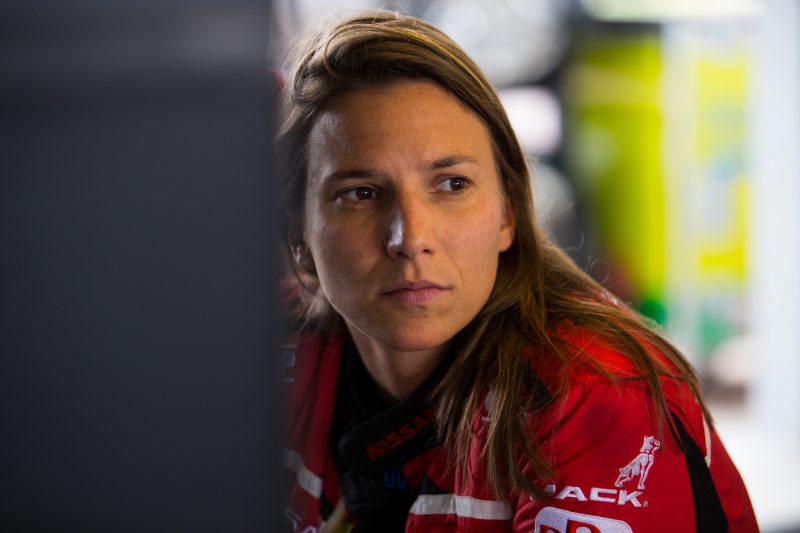 Simona de Silvestro is focussed on performing at this weekend’s Coates Hire Ipswich SuperSprint amid speculation regarding a possible move to join Triple Eight next year.

Several sources in the Supercars paddock believe the Swiss driver is the favourite to take over a potential third seat at Triple Eight in 2019 following confirmation Craig Lowndes will step down from full-time Supercars racing.

The Nissan Motorsport driver is unsure where she will be racing next season and is keen to secure her future sooner rather than later. It is understood the driver’s manager is to attend this weekend’s round at Queensland Raceway.

De Silvestro says talk of her moving to Triple Eight is purely rumour at this stage.

The factory Holden team is yet to officially confirm if it will continue to run three cars or even expand to four in 2019.

“It is just rumours. Right now my focus is here (on the racing this weekend),” De Silvestro told Speedcafe.com.

“Nobody from the team (Triple Eight) has said (anything) it is just journalists at this point. I don’t know if it (the speculation) is true or not.

“Sooner rather than later you want to know what is happening (next year) and what you can work for, but right now I’m happy where I am at.

“It is my job to do a better job in the car now and get the results and then we will wait and see.”

De Silvestro is thought to be a good fit for the Triple Eight squad with the 29-year-old a very marketable driver given her profile.

She would also arrive with backing from retail giant Harvey Norman.

Holden has also previously stated it wishes to field a female in one of its ZB Commodore Supercars, although the brand says it will have no influence on driver appointments at factory team Triple Eight.

It is also understood that the former IndyCar driver, while contracted to Nissan Motorsport, has a loophole to move away from the squad following the departure of factory backing from the Japanese marque at the end of the year.

Meawhile, Triple Eight team principal Roland Dane maintains a decision is yet to be made regarding the structure of his team.

However, he does admit there are several drivers he would be happy to see join his outfit in the future.

Last year there were rumours that Dane was trying to place de Silvestro in a drive at Tekno Autosports in what was touted as an effective fourth Triple Eight entry.

Dane is also understood to be an admirer of Chaz Mostert and has openly admitted to keeping an eye on factory Porsche junior driver Matt Campbell, who was signed by the operation as a co-driver last season.

“I can promise you that we have not made a decision yet on whether we’ll run two, three, or four cars next year,” said Dane on Fox Sports’ Supercars Trackside.

“We’ll certainly run two, but whether it’s only two or it’s three or whether it’s even four, I can’t tell you categorically at the moment.

“There are several people out there, that I’d be very, very happy to have driving for Triple Eight, and they probably know who they are. Let’s wait and see what happens.”