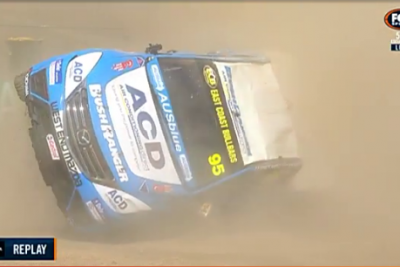 A wild rollover for Aaron Cameron has brought an early end to the day’s sole ECB SuperUtes Series practice session at Queensland Raceway.

Cameron squirmed in the Turn 1 brake zone before hitting the gravel trap sideways in his Peters Motorsport Mazda BT-50 and flipping.

Car #95 rolled three times before coming to rest on its wheels, after which Cameron exited of his own accord from the passenger door.

The accident appeared to be precipitated by a mechanical issue with smoke coming from the bottom of the Mazda as the 18-year-old began to slow at the end of Dick Johnson Straight. 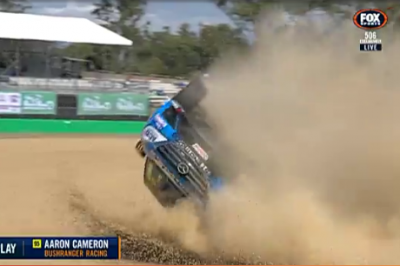 Harris was fastest after the first timed laps and improved twice more to take his BT-50 around the Ipswich circuit in a best time of 1:31.4523s, 0.3656s quicker than Cameron’s fastest.

Ben Walsh was last of the 11 entries after his WSM Hilux broke its diff.

The SuperUtes are back for Practice 2 tomorrow at 0945 local time/AEST, before Armor All Qualifying and Race 1 later in the day.