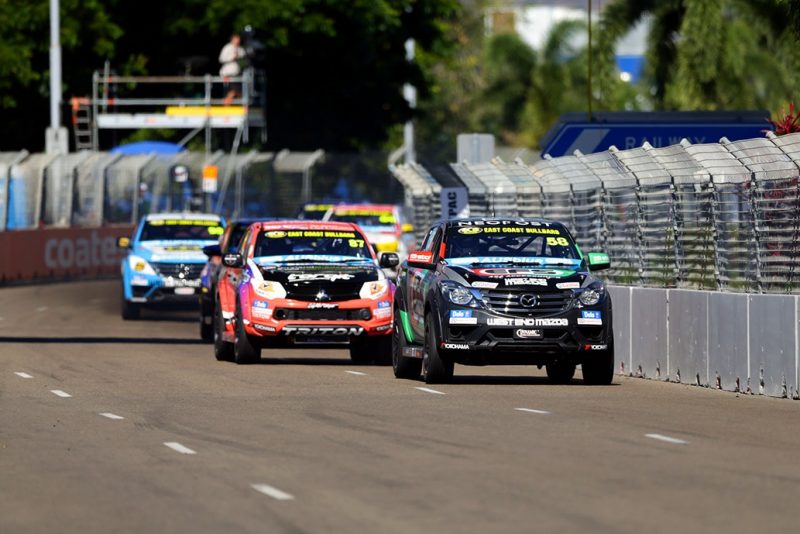 The SuperUtes field in Townsville, headed by Ryal Harris in a Mazda BT-50

Multiple V8 Utes Series winner Ryal Harris believes that the SuperUtes need more power in order to win fans over after a ‘disheartening’ reaction to the category so far.

The Queenslander, who previously campaigned both Commodores and Falcons, now races a Mazda BT-50 run by Peters Motorsport and sits second in the standings with a series-high five race wins.

He maintains that the SuperUtes, which are significantly more modified from their production specification than the V8 Utes of old, are an otherwise superior race car.

However, Harris believes that a lack of outright speed relative to the V8s needs to be corrected to generate fan support.

In Round 1 at Adelaide, the SuperUtes lapped around nine percent slower than their predecessors did on their last visit in 2016.

During their next round at Winton, the slowest circuit on the Supercars calendar, the deficit dropped to around six percent, before rising to around nine percent again last time out at Townsville.

The disparity has been attributed in part to the need to first achieve reliability from the turbo diesel package and current lack of availability of a sufficiently large R-spec tyre.

“The actual car itself, I love,” Harris told Speedcafe.com.

“(But) the fans don’t like them so you sort of feel like the people aren’t out there watching you and supporting you because they’re not fans of the cars.

“Driving them through the corners, braking, racing close quarters with other cars is good; they just need a bit more power.

“All these guys (race teams) have put in so much effort and commercially it’s awesome, but if the fans don’t like it then you can’t ignore that.

“It’s disheartening, but the actual cars are awesome to drive. They just need some more horsepower, by whichever means possible.”

While online commentary, and a straw poll conducted by Speedcafe.com in Adelaide, has been overwhelmingly negative, paddock chat from team owners is that fan reaction at race tracks is far more enthusiastic.

“My feedback from fans that actually come to the paddock and have a look at the car and talk to the teams about the cars is that they are excited to see something different,” he told Speedcafe.com.

“The negative feedback that we’re getting is the same negative feedback we were getting before the cars even hit the track, before anyone had even seen them race, and that’s because there’s an element of people out there that aren’t ready to embrace turbo diesel SUV racing.

“It doesn’t really matter what we do to the cars, if it’s got a diesel engine in it and it’s an SUV and they don’t want to see them race; there’s not much we can do to fix it, unfortunately.

“We’ve just got to build on making the racing closer and tighter and from that, the byproduct should be that it’s attractive racing and people won’t focus on the engine or the type of car it is.

“I think the racing’s the best it’s been so far.

“As far as the development goes, it’s an ongoing situation, and we’re improving the cars round by round.

“I think where the issue is, is that we’ve got to try and get some more numbers on the grid.

“We want more cars on the grid so we can have more cars racing side-by-side with each other.”

A grid of 10 to 11 cars has fronted to each round so far, down on numbers expected by Supercars, but Speedcafe.com understands that a handful of new cars are on the way.

The return of Steve Wilson’s Isuzu D-Max will make for an 11-car field this weekend at the Coates Hire Ipswich SuperSprint, with opening practice for SuperUtes on Friday morning.