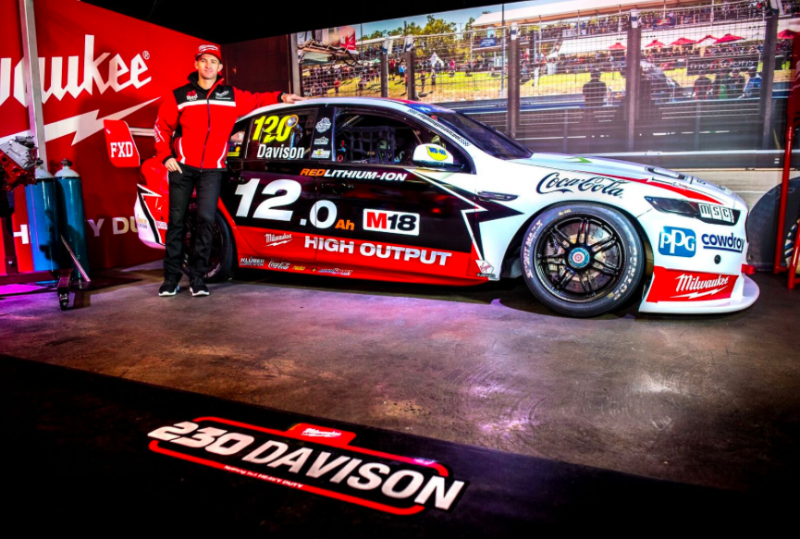 Will Davison with his new look Milwaukee Racing Falcon

Will Davison will sport a new livery and number for this weekend’s Coates Hire Ipswich SuperSprint.

Davison’s Milwaukee Racing Falcon will adopt black flashes on its flanks and will run under #120 to coincide with the launch of a new 12.0 Amp battery produced by the team’s title sponsor Milwaukee Tools.

It is the second time this year the team has switched numbers after Davison used #400 to commemorate his 400th career Supercars race in Perth in May.

“We’ve got a new livery for the Queensland Raceway round coming up, launching Milwaukee’s new 12.0 Amp battery, so something new and I think it looks fantastic,” said Davison.

“It’s amazing for us as a team to have a sponsor that’s so actively promoting their brand and so we’re proud to be repping the battery on the car this weekend, including the number 120 for the round.”

Davison heads to Ipswich off the back of a mixed weekend at the Watpac Townsville 400 that once again highlighted the team’s potential.

Despite carrying an injured left ankle, the 35-year-old scored a commendable ninth in Race 17, prior to qualifying for Sunday’s Armor All Top 10 Shootout, where he placed fifth.

Ir looked as though the squad would record back-to-back top 10 finishes before late race contact with Jack Le Brocq (Tekno Autosports) and then James Golding (Garry Rogers Motorsport) took Davison out of the race.

The livery will make its debut in Friday’s Additional Driver session where Davison’s older brother and Pirtek Enduro Cup co-driver, Alex Davison, will take the wheel.