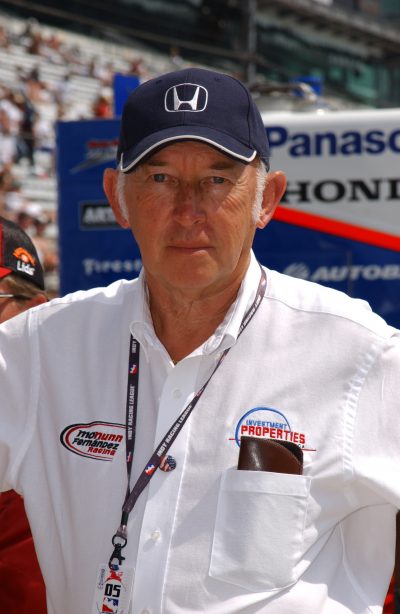 Born in Walsall, England on September 27, 1938, ‘Mo’ Nunn caught the motorsport bug only in his mid-twenties when he bought a Cooper Climax.

The self-taught racer went on to establish himself as a talent in Formula 3 but never broke into the ranks of Formula 1 as a driver.

After a short stint running his own Formula 3 team and constructing cars for others, his Ensign team entered F1 in 1973.

Ensign battled during its 10-year run at the top of the sport, a span in which it fielded the likes of Chris Amon and future Bathurst 1000 winner Jacky Ickx, and gave Nelson Piquet his debut.

With his time in F1 over, Nunn headed Stateside and combined with Emerson Fittipaldi to win the 1989 Indianapolis 500 at Patrick Racing.

At Chip Ganassi Racing, he was an engineer for four straight tiles from 1996 to 1999, for Jimmy Vasser, Alex Zanardi (twice), and Juan Pablo Montoya.

Nunn established his own CART team in 2000, which enjoyed limited success including two wins but was also hit by Zanardi’s horror crash at the Lausitzring in 2001.

He retired from motor racing at the end of 2005 before being diagnosed with Parkinson’s disease in 2009.

Speedcafe.com extends its condolences to Nunn’s family and friends.