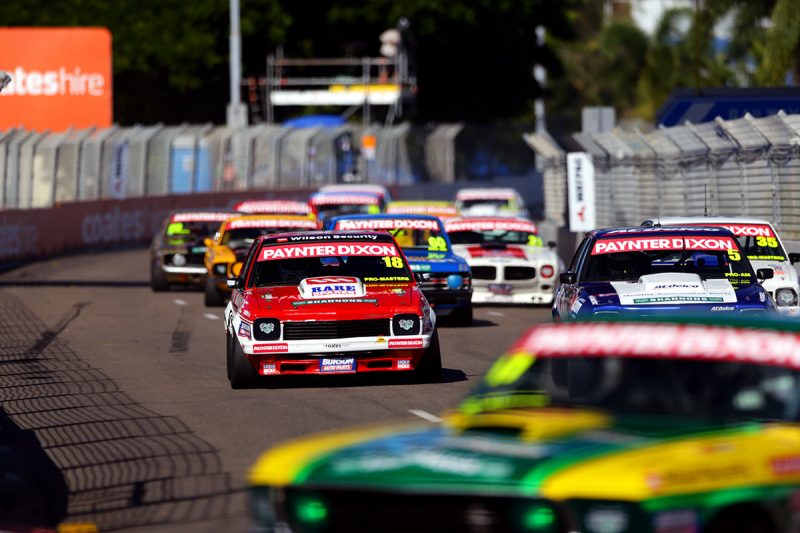 Bowe currently fields his iconic 1974 Holden Torana in the category, regularly appearing on the support card for various Supercars events.

In recent times, however, the two-time Bathurst 1000 winner has been at the centre of numerous incidents on track.

In 2017, Bowe was caught up in a multi-car pile-up on the opening lap of Race 2 at Winton that accounted for nine cars, suffering cracked ribs in the crash which was triggered by a spinning Jason Gomersall.

Round 4 of this year’s series in Darwin once again left Bowe with a bruised and battered Torana after he was turned around by Andrew Fisher at Turn 1 and copped a head-on impact from Mark King. 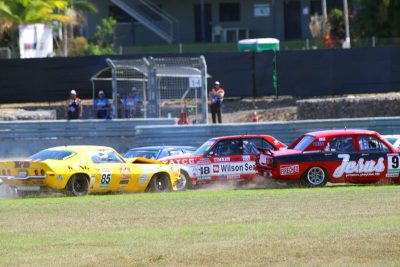 At the most recent round in Townsville, Bowe once again was at the centre of an opening-lap melee following contact with Bruce Williams at the start of Race 3.

Speaking with Speedcafe.com at the conclusion of proceedings in Townsville, Bowe said that he was not happy with the ‘unacceptable’ driving standards in TCM.

“I just try and do my best each race, despite some of the other competitors trying to kill me,” Bowe told Speedcafe.com.

“I like having a good race and I like taking my car home in one piece, and it’s not, and it wasn’t in one piece after Darwin – it’s just not good enough.

“The things that go on are just not acceptable; it’s random stuff but sometimes it’s the same people.

“And I understand now why Jim Richards is not racing as much, because he hates getting his car bent, like me.

“I don’t know, every meeting, the category managers speak to everybody about what is going on, but it doesn’t ever seem to fix it.”

Bowe added in a Facebook post, “Driver standards as usual are loose and we need a proper driver standards person, as we had when Greg Crick did the job.

“Now we have a badly damaged car and lots of dollars to spend (again).”

Speedcafe.com has since contacted TCM for a response to Bowe’s claims.

Currently category administrator and experienced racer himself, Rowan Harman, doubles as the series’ Driver Standards Advisor, working with CAMS officials and stewards at each race meeting.

It is understood that TCM has recently implemented a new penalty system, which sees instigators of unnecessary contact relegated to the rear of the grid for the following race or next round, known as the ‘one-touch rear of grid penalty’.

“We understand the differing level of driver experience in the category and that is always considered, but penalties are applied without fear or favour,” explained Harman in a statement to Speedcafe.com

“In each drivers briefing we are continually reminding the grid that TCM differs from other categories because of the variety in performance of the cars and experience levels of the drivers involved.

“Everyone has slightly different performance attributes and that plays a role in how they race with each other.

“Continually educating people of that fact will ideally lead to better awareness from the drivers in considering how they race.

“That’s part of the management process we are working on to endeavour to improve the driving standards.”

The Touring Car Masters series will be in action again at the Rabble.Club Sandown 500 from September 14-16.