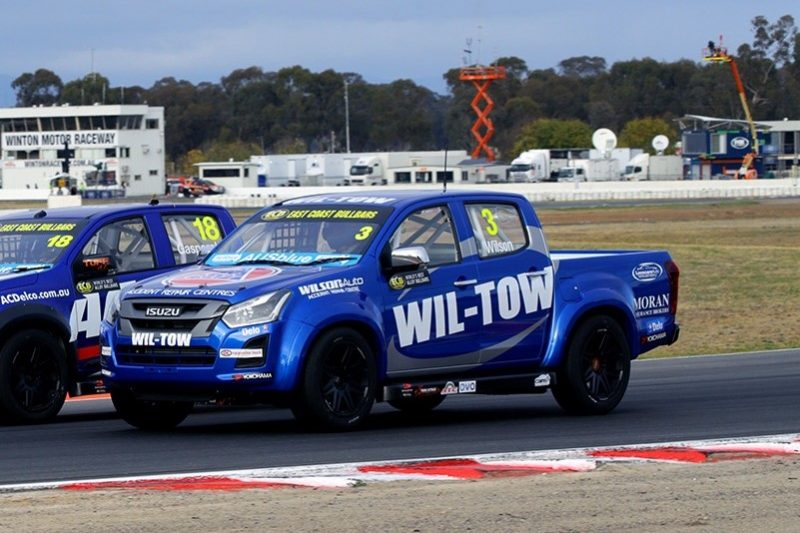 Steve Wilson in the D-Max at Winton

Steve Wilson has confirmed that his Isuzu D-Max SuperUte will be on the grid this weekend at Queensland Raceway after a testing rollover saw it withdrawn from the last round.

Tyler Greenbury was behind the wheel at the same circuit in preparation for a one-off start in the ECB SuperUtes Series at Townsville when he aquaplaned at the end of the back straight.

The D-Max tripped on the Turn 3 gravel trap and rolled multiple times before coming to rest on its roof.

With the field set to take to the Reid Park Street Circuit for practice just nine days later, after the long journey up the coast, the entry had to be scratched.

Wilson will be back on track this weekend, however, for what will be his and the car’s second round in the series after repairs were completed in recent days.

“We’ve got our ute all repaired and ready to go so we’ll be on track,” he told Speedcafe.com. We pretty much finished it off (on Monday).

“(It was) a big job, but we’ve got it all repaired and good to go and be on the track Friday.”

The weekend will effectively be another live test for the D-Max, which had only completed six laps in its first run since its competitive debut at Winton when Greenbury came unstuck.

The car had missed the inaugural SuperUtes round in Adelaide due to delays to engine homologation before being shaken down in late-March.

It saw more miles in April’s two-day test at Winton which preceded the round of the series held there during the following month, when it finished 10th, eighth, and ninth in the three races.

Craig Woods, in a Western Sydney Motorsport Toyota Hilux, holds a narrow lead over Peters Motorsport Mazda BT-50 driver Ryal Harris ahead of Round 4 at the Coates Hire Ipswich SuperSprint, where the SuperUtes will commence their weekend with opening practice on Friday morning.