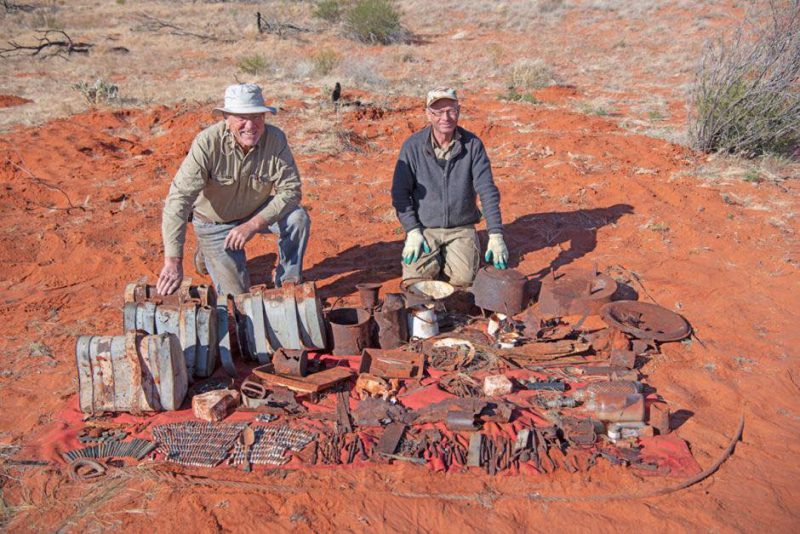 Larry and Peter Perkins with the haul pic: Peter Blakeman

Larry Perkins and brother Peter have made headlines after discovering equipment abandoned by Simpson Desert explorers over 100 years ago.

Former Royal Navy captain Henry Vere Barclay was leading an expedition through Central Australia in 1904 when they faced a critical shortage of water.

The party opted to leave a significant quantity of equipment behind in an attempt to continue on and find a water source.

Despite separate attempts to locate them in 1915 and 2013, the artefacts remained unrecovered.

After a four-and-a-half-day search on a quad bike, the Perkins brothers have now made that discovery, according to the ABC’s 7.30 program.

Larry Perkins studied a journal written by the party’s second in command, Ronald MacPherson, but was not convinced that MacPherson had correctly recorded the coordinates of the equipment. 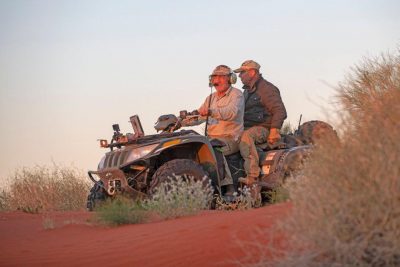 “(MacPherson) made a list at the back of the diary and he put the latitude and longitude in there and many people had thought, this will be easy to find,” Perkins told 7.30.

“But it didn’t stack up.

“I did a lot of homework and found that there’s no point in going to the latitude and longitude because the goods can’t possibly be there, based on reading all the pages of the journal.

“So I called up my brother and said, ‘Do you want to come out and waste a bit of time with me?’”

The goods have reportedly been described a “highly significant archaeological find” by Michael Wells of the Northern Territory Department of Tourism and Culture.

Perkins, a regular bushman since he formally cut ties from Supercars at the end of 2012, says that the discovery compares highly favourably to his achievements in motor racing, highlighted by six wins in the Bathurst 1000.

“We found this gear and not too many guys find gear like this.

“We didn’t stumble across it. We were looking for it.

“The four-and-a-half-days on the quad bike paid off based on enthusiasm, homework and a can-do attitude, which I’m proud of.”

Perkins is reportedly planning another expedition to recover more of the remains which he has not yet found.

Next Story Hazelwood to be race fit after shoulder treatment

Previous Story POLL: Should Supercars switch to a Summer Series?