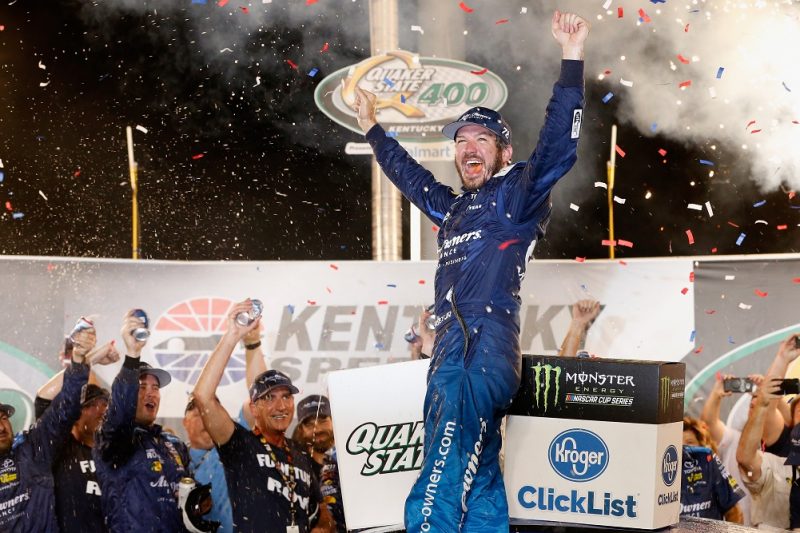 Martin Truex Jnr won each of the first two stages and the race overall but still faced his challenges in the Monster Energy NASCAR Cup Series race at Kentucky.

The defending champion led virtually all the way but had to come from behind in the second and third stages of the race as others rolled the dice on pit strategy.

He regained the lead for good when he passed Kurt Busch with 44 laps remaining and went on to take a 1.901s win over Team Penske duo Ryan Blaney and Brad Keselowski.

Truex Jnr had qualified on pole and the #78 Furniture Row Racing Toyota led until pitting just before halfway through the 80-lap first stage.

He faced a brief battle with Keselowski upon rejoining the circuit, just as Keselowski was called for pit lane speeding.

Kyle Larson had qualified 18th but the #42 Chip Ganassi Racing Chevrolet was put back to rear of grid when he missed pre-race driver introductions.

He had climbed to eighth when the first stage came to an end, while Kevin Harvick (#4 Stewart-Haas Racing Ford) and Kyle Busch (#18 Joe Gibbs Racing Toyota) were placed second and third, ahead of Blaney (#12 Ford).

Truex Jnr sat fourth for the start of Stage 2 after Joey Logano (#22 Team Penske Ford) chose to not pit under Caution and Kurt Busch took only two new tyres.

Logano quickly dropped away from the front of the field as Truex Jnr passed he and Jimmie Johnson (#48 Hendrick Motorsports Chevrolet), the Stage 1 lucky dog, and set after Kurt Busch.

Truex Jnr quickly bridged the small gap and got by the #41 Stewart-Haas Racing Ford of Kurt Busch on Lap 98.

He had pulled just over three seconds clear when the first unscheduled Caution of the day/night affair came for Alex Bowman’s hit with the wall at Turn 3, after losing a tyre on the #88 Hendrick Motorsports Chevrolet.

Most took two tyres under yellow and Truex Jnr retained the lead, but with Kyle Busch now next in the queue from Harvick, Blaney, and Paul Menard (#21 Wood Brothers Racing Ford), while Kurt Busch was back in eighth.

Truex Jnr remained in front when the race went green again for the final 46 laps of the stage.

Kyle Busch had a battle on his hands with Blaney but ended up prevailing to hold onto second, while Harvick and Larson were fourth and fifth respectively.

Keselowski shot up from 15th to first by taking only two new tyres during the interval between stages, while Kyle Busch lost several positions from where he resumed in fourth after getting crossed up twice on the restart lap.

Truex Jnr and Harvick had a duel for second before Larson came through to take over the position from the #78 Toyota.

Larson’s race began to unravel, however, due to track bar issues with the #42 Chevrolet and he dropped away from the front-runners.

Truex Jnr caught Keselowski but couldn’t pull off a move until the #2 Ford got loose through Turn 4 on Lap 201.

There was still time for another twist when an engine failure for JJ Yeley’s #23 BK Racing Toyota brought about the second and final unscheduled Caution of the race.

Kurt Busch moved from fifth to first in pit lane with only two tyres changed on the #41 Ford, ahead of Truex Jnr, Blaney, Kyle Busch, Keselowski, and Harvick.

Truex Jnr made the pass nine laps into the stint, inviting Blaney to do likewise three corners later.

Kyle Busch continues to lead the series with five wins and 30 playoff points to his name.

Round 20 is the Foxwood Resorts Casino 301 at New Hampshire Motor Speedway on July 20-22 (local time).