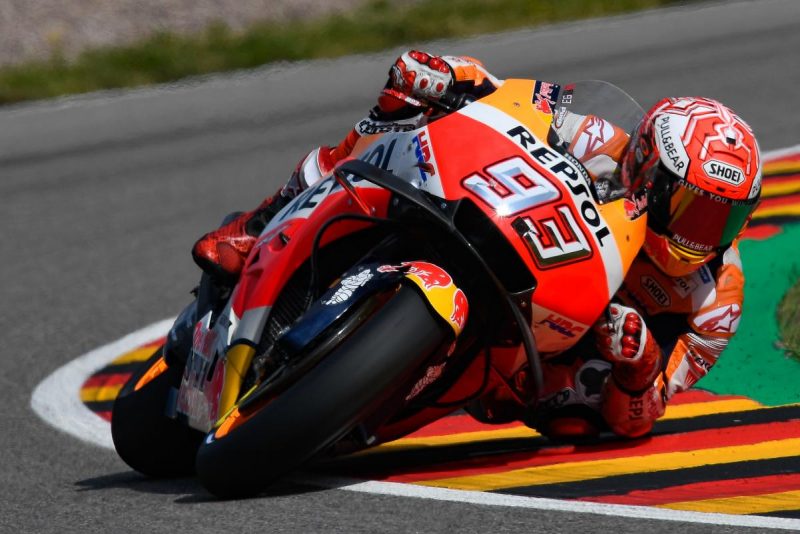 Marc Marquez is now six wins from as many MotoGP starts at the Sachsenring and nine in a row across all classes.

The Repsol Honda rider passed Jorge Lorenzo for the lead shortly before half distance in the German Grand Prix and saw off a brief charge from Valentino Rossi, the latter of whom finished second from Movistar Yamaha team-mate Maverick Viñales.

Lorenzo got the holeshot from third on the grid as Marquez, who was kept wide into the first corner, managed to slot in between Danilo Petrucci and Valentino Rossi to assume third.

Marquez passed Petrucci at Turn 1 on Lap 5, perhaps incentivised by Lorenzo having just set the then-fastest lap of the race.

Rossi seemed to be similarly prompted to get by the Pramac Ducati for third position four laps later, as the top two threatened to pull away.

Marquez had by then been stalking Lorenzo for several laps and the Ducati Team rider ran wide into Turn 1 on Lap 13.

His future team-mate duly took the invitation when he went underneath Lorenzo at the end of the lap.

Rossi soon bridged the gap to #99 and when Lorenzo couldn’t get turned in at Turn 10, ‘The Doctor’ took over second position on Lap 16.

A brief charge from Rossi followed and the Italian had the deficit as low as 0.639s with 11 of 30 laps remaining.

Marquez, however, responded with a succession of fastest laps to take the race away from the Italian.

The lead peaked at 3.447s with two laps to go before the Spaniard took the chequered flag to make it a fifth win of the season and stretch his championship lead to 46 points ahead of the summer break.

“It was quite tough, especially in the beginning, because the start was not perfect, I lost two positions, and then to overtake Ducati riders is quite difficult,” said Marquez.

“But then I started to push. I saw that Valentino was coming but at the same time I was trying to manage the tyre and then when I see (the margin fall to) +0.6, I say, ‘Okay, now it’s time to push.’

“Then I did one of my fastest laps of the race and I was able to keep a good pace. Nine victories in a row here is incredible.”

Lorenzo had made two fruitless attempts to try and re-pass Rossi at Turn 1, one of which nearly ended in disaster when the outgoing Ducati rider fired down the inside but couldn’t stick the move.

However, with his soft compound front tyre rapidly running out of grip, Lorenzo’s pace fell away significantly and he became easy pickings for the three riders behind.

On Lap 26, Petrucci got by when Lorenzo couldn’t pull up at Turn 1 and then Viñales at Turn 12.

Viñales would benefit also from a similar, albeit less dramatic, struggle for Petrucci and took up a podium position on the penultimate lap.

In the meantime, Nieto Ducati’s Alvaro Bautista had also needed only to ride through the gap left when Lorenzo again ran deep into Turn 1 on Lap 28.

They therefore finished, from third to sixth, Viñales, Petrucci, Bautista, and Lorenzo.

Neither Andrea Dovizioso (Ducati Team) nor Dani Pedrosa (Repsol Honda) had much of an impact as they ended up seventh and eighth, respectively.

Johann Zarco climbed from 13th on the grid to run in eighth through the middle third of the race before losing a position to Pedrosa on Lap 24.

Both Suzuki Ecstar riders had Pol Espargaro (Red Bull KTM) to thank for an unhappy afternoon.

Andrea Iannone finished was only 12th after being hit by Espargaro on his way to going down and taking Alex Rins with him at the second corner of the race.

Jack Miller had to ride to the edge of the gravel trap to avoid running into the two of them and was six seconds off second-last position at the end of the opening lap.

The Pramac Ducati rider gradually rode his way back to 14th by the chequered flag.

Cal Crutchlow didn’t make said flag having run wide into Turn 12 and lost the front of his LCR Honda while running fifth on Lap 10.

Aleix Espargaro was a non-starter due to “thoracic trauma”, according to race control, after a sickening highside on his Gresini Aprilia during the warm up.

The season resumes in three weeks with the Czech MotoGP at Brno (August 3-5).