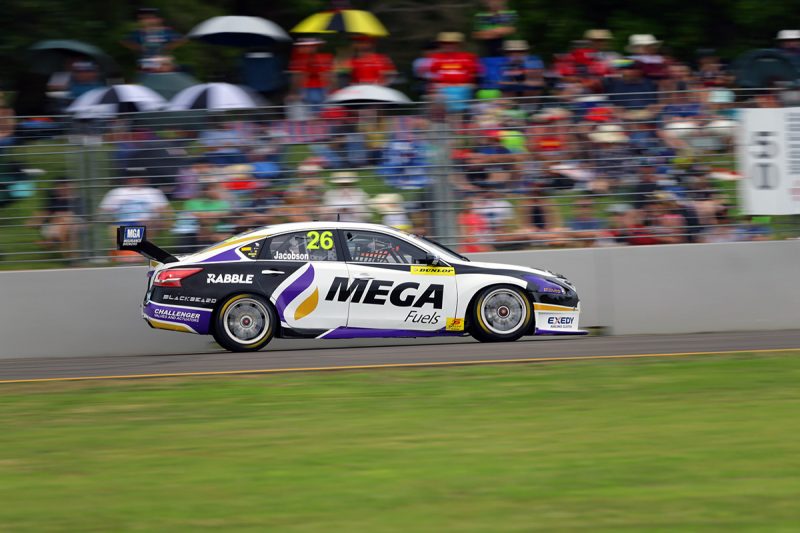 Garry Jacobson’s Dunlop Super2 race win in Townsville was made all the more special by the presence of his mother who continues to recover from a major car crash.

Jacobson’s mother was hospitalised during the off-season after being the victim of a high-speed head-on collision near her Shepparton home.

The Townsville weekend, Round 4 of the series, was her first chance to attend an event after several episodes of surgery.

Jacobson took victory in Saturday’s 21-lapper after being best placed to take over the lead when a suspension failure struck Macauley Jones.

“My Mum broke her leg a week before Christmas and this was the first round she could get to,” the MW Motorsport driver explained.

“We got a race win (on the Saturday) so that one was definitely for Mum.”

Expanding on the experience to Speedcafe.com, Jacobson added, “It was a special moment for me just to have Mum there again because we’re a family that works really hard.

“Sometimes you (compete) for yourself but then there are other means of motivation that you do things for as well and I knew that it was the first opportunity to win a race for my mother while she was there live at the event.

“I won that race at Adelaide, which was special, and I had her on Facetime after it to show her the trophy but this time she got to see it live.

“She sat in one of the stands all day and just enjoyed herself in sunny Townsville and got to watch her son win a race.

“It was a very, very special day that I’ll cherish for a long time.

“To do anything to take the pain away from the six surgeries that she’s had to do this year was an extra reward.”

Jacobson also revealed a lucky escape from a mechanical drama in the opening race of the weekend, when his Nissan Altima’s engine gave up on the cooldown lap.

After qualifying third for Race 1, the spare engine and a set-up mis-step hampered him during Sunday morning’s Armor All Qualifying when he was 10th-fastest before being promoted due to a grid penalty further up the field.

Jacobson nevertheless climbed to fifth by the chequered flag to secure second for the round, a result he said was testament to the MWM crew.

“I just love how hard they work,” he said shortly after Race 2.

“We qualified 10th, we could have easily given up, but we just kept trying.

“We had to change an engine overnight, we had an engine failure just as I was coming in after I won the race yesterday, so they had so many challenges but they just never give up.

“I’m really happy with their effort and to get second was great.”

While he concedes that a second Super2 title will be a hard ask, the 2016 series winner says that his aim is to apply pressure to Dumbrell and second-placed Chris Pither.

“I’m just fighting to win every single practice session, qualifying, and race from here on in,” Jacobson explained.

“The only way to win the championship is to put pressure on the other drivers, maybe try and force them into a mistake, but it’s a longshot and I understand that.

“We had a lot of bad luck at Symmons Plains, we got taken out in two races out of three, and that put us in a difficult position in terms of the championship fight.

“It’ll be maximum attack and we’ll be fighting really, really hard and taking the necessary risks that we need to in order to put pressure back on the championship leaders.”

Jacobson will take part in Additional Drivers Practice at the Coates Hire Ipswich SuperSprint (July 20-22) in preparation for his Pirtek Enduro Cup co-drive with Rick Kelly.

Previous Story Pither: No decision yet on GRM enduro pairings