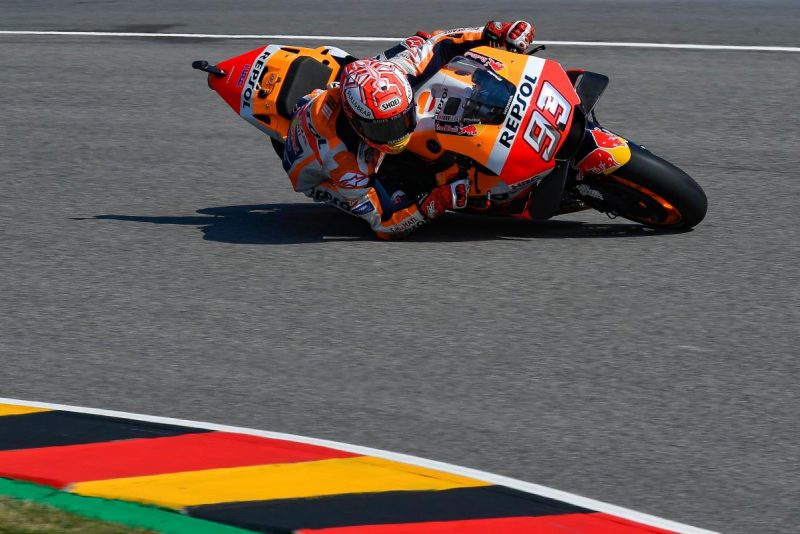 Marc Marquez has broken the track record to deny Danilo Petrucci a first ever MotoGP pole in qualifying for the German Grand Prix.

Three riders held the outright lap record around the Sachsenring during qualifying, with Jorge Lorenzo the first to do so and therefore earning the slot on the outside of the front row.

Lorenzo went from second to first at the start of his second run, clocking a 1:20:327s on his Ducati Team entry.

Half a second later, Petrucci had demoted the factory rider to put his Pramac Ducati onto provisional pole with a 1:20.295s.

Marquez went against the grain by going for three runs aboard his Repsol Honda, first with a hard compound front tyre, then a medium, before switching back to the hard in part due to his tyre stocks.

Needing to find nearly a quarter of a second, he was faster to the first sector than Petrucci on his penultimate lap but had to save a near-crash at Turn 3 and came up 0.014s short of pole.

The Spaniard then ran deep into Turn 1 but made up time through the middle of the lap and recorded a 1:20.270s.

The pole is Marquez’s ninth straight at the Sachsenring across all classes.

“Honestly, I didn’t expect this pole because on the last tyre I felt better but I made a few mistakes,” he revealed.

“One in Turn 3 and I nearly crashed, but even after that I kept pushing and did a good lap time.

“Then on the last lap I made another mistake that was so difficult to recover what I lost, but these 20 milliseconds were enough to get the pole.”

Dovizioso had in fact come through Qualifying 1 with the fastest time in that 15-minute stanza, but his long run pace in Free Practice 4 suggests that the #04 factory Ducati will be a threat in Sunday’s race.

Aleix Espargaro was faster than both but copped a six-position grid penalty for riding slowly on the race line during FP3, meaning he will occupy 19th on the grid on his Gresini Aprilia.