McLaughlin: DJRTP has some things up its sleeve

McLaughlin: DJRTP has some things up its sleeve 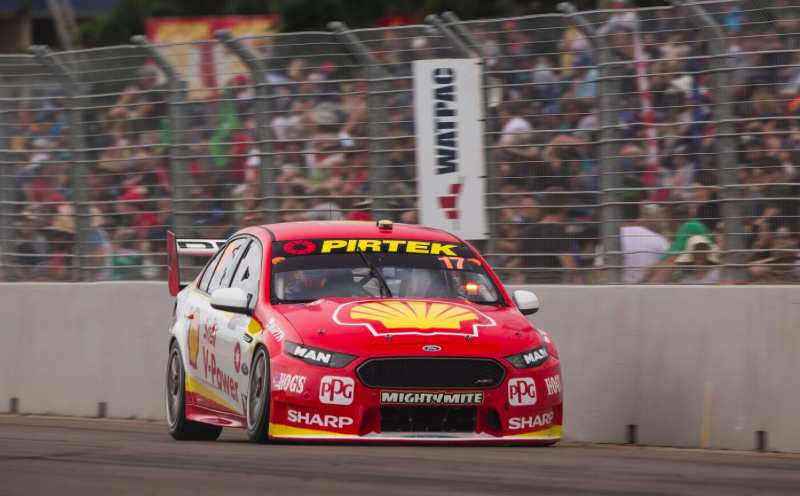 Scott McLaughlin has hinted that his Shell V-Power Racing team has some things up its sleeve as it prepares to take the fight to Triple Eight at the Coates Hire Ipswich SuperSprint next weekend.

McLaughlin was unable to challenge the dominant Red Bull Holden Racing Team Commodores at Townsville leaving him to bank important championship points by finishing third in the two races.

Triple Eight appeared to have taken a step forward with the development of its new ZB Commodore in Townsville after showing improved pace in qualifying that led to back-to-back one-two finishes, shared between drivers Jamie Whincup and Shane van Gisbergen.

Reflecting on the rise of Triple Eight, the Kiwi revealed that his team is working on developments earmarked to improve his Falcon FGX package that may arrive at Queensland Raceway.

This comes while the squad is heavily involved in bringing the Mustang Supercar project to life for next year.

“Ludo (Lacroix, engineer and technical director) reckons there is (more to come from the Falcon package),” said McLaughlin post-race.

“We’ll just go with him.

“I think we’ve got a few things up our sleeve at the moment we’re working on. We’ll try and get on the car hopefully for QR.

“I don’t know what the plan is development wise but we are obviously working towards next year as well but we are constantly working on what we have now to make it better because at the end of the day you’ve got to look for the now and get after this year’s championship as well.”

Shell V-Power Racing managing director Ryan Story believes rivals Triple Eight are working hard to close the gap to his team and expects a fascinating battle for the remainder of the season.

“We have to think bigger picture. If you can’t win then you have got to maximise and if you are good enough to finish third then you finish third,” Story told Speedcafe.com when reflecting on the Townsville weekend.

“We saw them (Triple Eight) at Adelaide and they were super strong on a similar type of layout. They are working incredibly hard in understanding the car and we don’t take for granted that they are coming for us.

“I think it will be (an interesting battle) and we will see more of it over the course of the season. We are looking forward to the challenge and every race weekend is going to be a mammoth effort to ensure we are on the podium scoring maximum points.”

The Supercars championship continues next week with the Coates Hire Ipswich SuperSprint held from July 20-22.